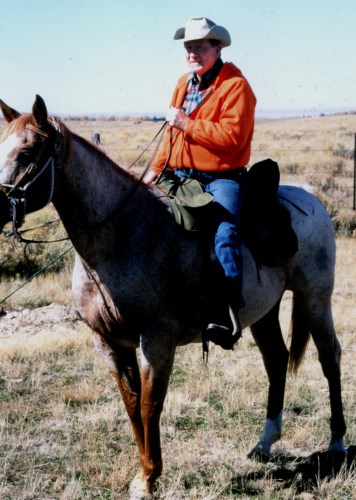 John was born to Ben and Saima (Leino) Collamer and raised in Hanna, Wyoming. He was the valedictorian of his high school class, attended pre-veterinary training course at the University of Wyoming, obtained his BS degree from Colorado A&M University and his Doctor of Veterinary Medicine (DVM) from Colorado State University.

He married Sonja (Soreide) and together they raised four children; Deb Ridlen (Gus), Mike Collamer (Lori), Ken Collamer (Susan), and Kerry Steward (Mark). John and Sonja also owned and operated the Saratoga Veterinary Clinic which served Carbon County and provided large and small animal veterinary services until their retirement. John also retired as a Colonel from the US Army Reserves. He was actively involved in many professional and civic organizations and served as the Vice President for the Wyoming Jaycees, President of the Wyoming Veterinary Medical Association, Board Member of the Wyoming Veterinary Medicine Board, City Council Member of Saratoga, Elder for the First Presbyterian Church of Saratoga, and member of Masonic Temple Saratoga Lodge#14, and I.O.O.F. Saratoga Lodge #43. He was recognized as the Wyoming Veterinarian of the Year twice in his career. John also volunteered time to help and mentor 4-H and FFA kids and provided free veterinary care for their animals.

John was an avid outdoorsman and loved to share stories of his hunting, fishing, and camping adventures. His children and grandchildren all share his love of the outdoors and have many stories of their own regarding their adventures and misadventures with him.

A memorial service will be held at 1 p.m. on Saturday, June 19, 2021, at the First Presbyterian Church, Saratoga, Wyoming. In lieu of flowers, contributions may be made in his honor to the North Platte Valley Medical Center, P. O. Box 549, Saratoga, Wyoming 82331, or NPVMC.org
Published by Rawlins Times from Jun. 19 to Jun. 20, 2021.
To plant trees in memory, please visit the Sympathy Store.
MEMORIAL EVENTS
Jun
19
Memorial service
1:00p.m.
First Presbyterian Church
Saratoga, WY
Funeral services provided by:
Jacoby Funeral Home - Rawlins
MAKE A DONATION
MEMORIES & CONDOLENCES
Sponsored by Jacoby Funeral Home - Rawlins.
0 Entries
Be the first to post a memory or condolences.