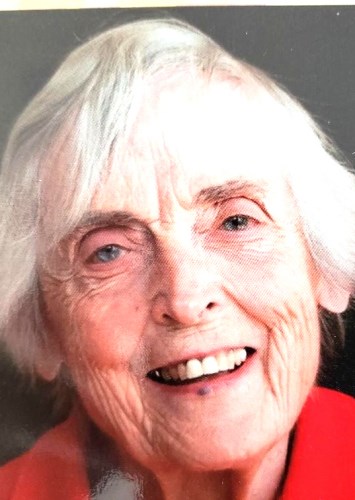 Lois was born in the spring of 1922 in Sterling, Co. Three weeks later, she was adopted by Solomon Lee and Zelda Biederman Johnston of Longmont, Co. She and brother Leroy grew up on a 10-acre farm on the west side of town. As a child during the depression and living on what you could raise or grow, she learned to recycle, reuse, or repurpose way before it became "a thing." Lois graduated from Longmont High School in 1940. She attended DU for 3 semesters before deciding that the family's limited tuition money would be better spent on the education of her brother. Seated alphabetically in her freshman psychology class, she met Fred Kelly.

Fred enlisted in the US Army during WWII. Upon his discharge the couple was married in Denver on Dec. 29, 1945. The newlyweds moved to Fred's hometown of Rawlins, Wy. For almost 40 years they were active in the community and raised two children, daughter, Irene, and son, Fred Jr.

The couple was heavily involved in the Masonic Temple in Rawlins. Lois was a member of Eastern Star and served as Queen of Daughters of the Nile, Tamah Temple #73 in 1962-63. She was a 50-year member of Chapter AF, PEO in Rawlins. Lois spent years with her sewing group making blankets, stuffed toys and other projects for the benefit of the kids at the Shrine Hospitals. For over 30 years she served on the Board of Directors of the Miller Stock Co., in the capacity of Secretary for many of those years.

After Fred's death she moved to Denver. She enjoyed traveling, gardening, and cooking.

The center of Lois's universe was her family. She was the quintessential matriarch. She loved a good party and hosted many family dinners. Lois was thoughtful, generous, loving, and could have written the book on positive thinking. She took on the challenges of aging with her wonderful sense of humor. Her display of gratitude and "pure spunk" was inspirational. Lois nearly wore out the phrase "Thank You." She was as independent as they come, taking extraordinary pride in the fact that she had an active driver's license and lived alone in her own home until the end of her life.

The physical body may be gone, but the essence of the life she lived will be with all 3 generations of her survivors for their entire lives. Lois, Mom, Grandma, Gigi will be missed dearly by family and friends.

Preceding her in death were her parents, her brother, and husband Fred. She survived by her daughter, Irene and Son, Fred Jr, and their families, (four grandchildren, and 4 great grandchildren.)

A celebration of her life will be held Sept. 25th at 2 pm at St Thomas Episcopal Church in Rawlins with a reception to follow in the basement of the church. In lieu of flowers contributions may be made to the Shriner's Hospitals for Children 1275 East Fairfax Road, Salt Lake City, Ut 84103-4399.
Published by Rawlins Times from Sep. 18 to Sep. 19, 2021.
To plant trees in memory, please visit the Sympathy Store.
MEMORIAL EVENTS
Sep
25
Celebration of Life
2:00p.m.
St Thomas Episcopal Church
Rawlins, WY
MAKE A DONATION
Please consider a donation as requested by the family.
MEMORIES & CONDOLENCES
0 Entries
Be the first to post a memory or condolences.