Search by Name
Richard H. Shaner
ABOUT
Oley Valley High School
FUNERAL HOME
Edward J Hildenbrand Funeral Home Inc
346 W Main St
Kutztown, PA
Richard H. Shaner Richard H. Shaner, 82, historian and folklorist, of Kutztown, passed away Sunday, January 10, 2021. He was the husband of Eleanor (Trout) Shaner. Born in Allentown the son of the late Harry E. and Esther (Hilbert) Shaner. A graduate of Kutztown State College in 1960, he received a position teaching history in the Allentown School District and was elected secretary of the Lehigh County Historical Society. In 1966 he joined the teaching staff of the Oley Valley School District where he was head of the history department and taught history, economics and sociology in high school. While living in the Oley valley he married Eleanor (Griesmer) Trout in 1970. He was a member of Salem U.C.C., Oley. In 1960 Mr. Shaner became a major exhibitor at the Kutztown Folk Festival and assisted Dr. Alfred Shoemaker, its founder, with educational demonstrations and folklife research. As a writer of folklife, Mr. Shaner became a published author and recognized authority on the Pennsylvania Dutch. He was a regular writer for Pennsylvania Folklife Quarterly and a contributor to the Historical Review magazine of the Berks County Historical Society. Urged by Dr. Shoemaker to showcase an American folklife festival for the coming bicentennial in the 1970’s Richard Shaner founded the annual Lobachsville Folk Festival in 1972 at the Keim Homestead with the assistance of his Oley Valley High School students. Proceeds of the Lobachsville event, which ran from 1972 to 1979, were used by Mr. Shaner to publish an American Folklife Journal. Mr. Shaner retired from teaching in 1995 after a stroke and resided with his wife and son Erin, in Kutztown, where he continued to be active with the community folklife festival and was advisor to Kutztown University on matters concerning the Pennsylvania Dutch Culture. He and his wife were active with the Preservation Trust of Berks County as well as the county historical society. In 2015 he co-authored “Oley Valley – the Federal Years” which was published by the Pennsylvania German Society. In addition to his wife Eleanor, he is survived by, son Erin and wife Jamie, sister Sylvia and husband Theodore Mayo, numerous nieces, nephews and cousins. Services are private. In lieu of flowers contributions may be made to a historical organization. Edward J. Hildenbrand Funeral Home Inc., Kutztown entrusted with arrangements.
Published by Reading Eagle from Jan. 12 to Jan. 17, 2021.
To plant trees in memory, please visit the Sympathy Store.
MEMORIAL EVENTS
To offer your sympathy during this difficult time, you can now have memorial trees planted in a National Forest in memory of your loved one.
Funeral services provided by:
Edward J Hildenbrand Funeral Home Inc
MAKE A DONATION
MEMORIES & CONDOLENCES
Sponsored by Edward J Hildenbrand Funeral Home Inc.
13 Entries
There can be no accurate estimation of the cultural and spiritual value contained within the vast corpus of Mr. Shaner’s legacy and work. Thank you, and god bless you and yours Richard. +++
Cody Dickerson
Acquaintance
February 28, 2021
Dear Eleanor, I am so sorry to read of Richard’s passing. May God surround you with His comfort and peace. May your memories be a source of comfort in the days ahead. With sympathy, Jan Ferree
Janet Ferree
Friend
January 25, 2021
Dick was a wonderful and generous man who devoted his life to the understanding and preservation of our Pennsylvania German heritage. There was nobody more generous with their time and enthusiasm .
Ron Pook
Friend
January 20, 2021
RIP my sympathy goes out to your family. Great teacher you will always be remembered. Frances “Turczynski “ Hallman
Frances
Student
January 19, 2021
I had Mr. Shaner as my history teacher at Raub Junior High School in the early 60’s. He was an excellent teacher and I credit my ongoing interest in history to him. My condolences to his family.
Blaine Holden
Student
January 18, 2021 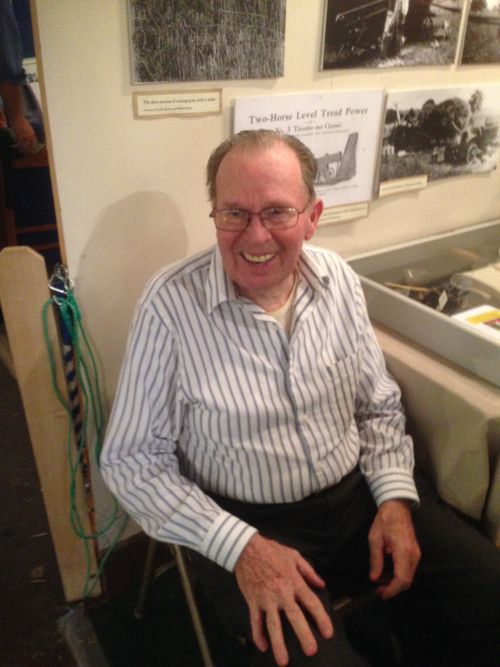 Mr. Shaner was a top shelf teacher. I took every history course he taught. Will cherish all you taught. Thank you for sharing your knowledge. Class of 1981.
Steve Heller
Friend
January 18, 2021
I still remember his passion when he taught about Oley Valley folklore. He was an excellent teacher.
Cheryl (Hinkle) Machemer
Student
January 18, 2021
My condolences to the family. Mr. Shaner was a great teacher at Oley Valley HS.
Gail Lacombe Good
Student
January 17, 2021
Deepest sympathies to the entire family. I have happy memories of Mr Shaner as my teacher. Kathy McCann Evans, Class of 1970
Kathy Evans
Student
January 17, 2021
Mr. Shaner was a respected teacher and admired by me and my classmates. I will never forget the excavations along the Manatawny Creek in my senior year in 1967. Mr. Shaner was the consumate educator always willing to go the extra mile for kids.
You did good and you made the Oley Valley a better place. RIP.
Terry Fisher
Student
January 16, 2021
Deepest condolences to my dear family friends. I have had the pleasure of knowing "Dad" for many years and am thankful for his help with our charity events and for just being a kind and generous person. Condolences to "Mom" and my "brother" Erin, Jamie and the rest of the family. Our love, thoughts and prayers are with all of you as always.