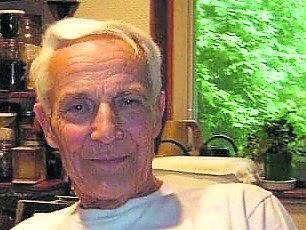 ABOUT
Kutztown Area High School
FUNERAL HOME
Ludwick Funeral Homes
333 Greenwich Street
Kutztown, PA
Richard A. Sharadin, 90, of Kutztown, died on Tuesday, November 16, 2021 at the Lehigh Valley Hospital surrounded by family. Born in Kutztown, Richard was a son of the late Francis A. and Luella C. (Kline) Sharadin. He was the longtime companion of Catherine “Cat” R. Elwell. “Rich” was a 1949 graduate of Kutztown Area High School and attended Kutztown University. He honorably and faithfully served his country in The United States Air Force during the Korean War, stationed primarily at Dover Air Force Base. After his honorable discharge for the USAF, Richard served in the Pennsylvania Air National Guard. Richard was a man of many talents and interests including his love of outdoors and nature. He was the lead counter and rapture identifier at Hawk Mountain Sanctuary prior to being named assistant curator to Alex Nagy in 1971. Richard was considered to be the best raptor birder in the East. As a self-taught photographer, he searched for Red Tail Hawk nests and learned how to video tape them at their nests. In the 1950’s, Richard and his father Francis built and maintained their own dirt track race cars driven by numerous racers including one of the region’s most accomplished drivers of the era, Vince Conrad. Richard was an excellent mechanic and sports car enthusiast having restored several pre-fuel injection Alfa Romeos. Throughout the 1980s’ & 90’s Richard worked at several automotive repair shops including J & J Auto Racing Services in Bally. While there he traveled to racetracks throughout the United States following SCCA sanctioned events maintaining and working on race cars. He was recognized for his work on Formula Ford racing chassis. Richard eased into retirement working for his friend and Scandia Stoves owner Brian Thomas of Kutztown. Richard was an amateur Botanist specializing in artic alpine plants of the high mountain tops. To do this he had to climb the high peaks of Vermont, New Hampshire, Maine, Quebec’s Gaspe Peninsula, and the province of Newfoundland. He spent 18 summers camping and exploring Newfoundland and Labrador where he achieved 52 degrees north latitude in the town of Cartwright where the gravel road ended. In his later years, Richard loved bluegrass music and traveled to many festivals in his pristine Roadtrek van. He was known as the sound man and album producer for the band “Cat Elwell & Saucony Grass”. In his free time, Richard could be found reading a great novel, admiring his cats, Sabine and Nelson, or running the sound system for the bluegrass band. Richard was admired by so many and will be sorely missed by his family and friends. In addition to his companion Cat, Richard is survived by his three children, Stephen E., husband of Susanne M. (Wood) Sharadin, Michael S., husband of Jennifer L. (Kraemer) Sharadin, both of Kutztown, and Jessica A. (Sharadin), wife of Christopher D. Charlton, Collingswood, NJ, and eight grandchildren, Madison Kraemer, William Sharadin, Jacob Sharadin, Oliva Sharadin, Emilee Ratcliffe, Michael Sharadin, Luke Charlton and Lucas Ratcliffe. Along with his parents, Richard was predeceased by his sister, Mary V. (Sharadin) Weaknecht in 2011. The family will host a celebration of life service at a later date. Ludwick Funeral Homes, Inc., Kutztown, is in charge of arrangements. Memories and condolences may be shared at www.Ludwickfh.com.
Published by Reading Eagle from Nov. 23 to Nov. 24, 2021.
To plant trees in memory, please visit the Sympathy Store.
MEMORIAL EVENTS
To offer your sympathy during this difficult time, you can now have memorial trees planted in a National Forest in memory of your loved one.
Funeral services provided by:
Ludwick Funeral Homes
MAKE A DONATION
MEMORIES & CONDOLENCES
Sponsored by Ludwick Funeral Homes.
2 Entries
Sir, Thank You for Your service to our country. God Bless You! God be with your family! Sincerely, A Grateful US Citizen
Grateful
November 24, 2021
THANK YOU FOR SERVING!!
A.J. US Army Retired
November 24, 2021
Showing 1 - 2 of 2 results