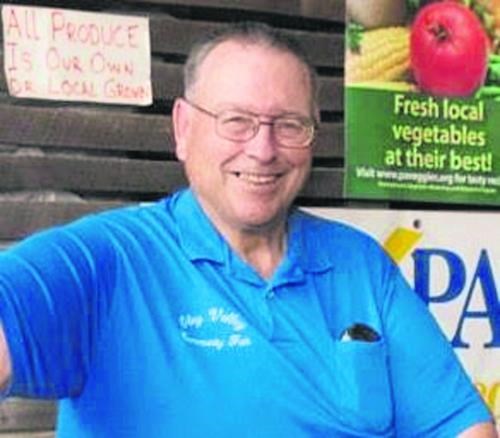 BORN
1943
DIED
2020
ABOUT
Oley Valley High School
FUNERAL HOME
Stitzel Family Funeral Homes and Crematory, Inc - Oley
423 Main Street
Oley, PA
Steve F. Fisher Marjorie A. Fisher, her sons Kent, Kirk and their respective families sadly announce the passing of Steve F. Fisher on April 23, 2020. Born October 28, 1943, he was the son of the late Frank and Hilda (Eckert) Fisher, Oley Township. Steve was a graduate of Oley Valley High School in 1961. He was very active in 4-H and FFA and showed beef cattle and swine at all the local fairs. On May 22, 1965, he was married to Marjorie who is the daughter of the late Leroy and Arlene (Marks) Werner of Mohnton. In 1966 Steve graduated third in his class from Delaware Valley College earning a Bachelor’s of Science degree in Agronomy and then attended the University of Minnesota for post-graduate work. As well as spending his lifetime working on the family farm, Steve’s professional life was also defined by his devotion to agriculture. Initially employed by the Reading Bone and Kerr-McGee companies, he then spent twenty-eight years with FMC Corporation as an agricultural sales rep. There he earned the coveted title of “Master Salesman” three times, thus being recognized as one of their top three national sales representatives. To this day he is remembered fondly by many of his customers and contemporaries in the field. Steve was selected by the United States Grasslands Council to be part of an agricultural diplomatic delegation traveling to China and Mongolia. He also was employed as a substitute science and biology teacher for Oley and surrounding school districts. Steve shared his passion for farming and showing livestock with his sons by leading various 4-H clubs and traveling the East coast with his family showing beef cattle at numerous fairs and expositions. The Oley Fair however, always held a special place in his heart and he acted as the Chairman of the beef department there for over forty years. Steve was an Elder, Sunday School Teacher and life-long member of Salem United Church of Christ (Oley) and acted as Treasurer of the Oley Union Cemetery in Spangsville. He was also Vice President of the Oley Valley Historical Society. Steve aka “Poppy” spent his later years at the family homestead. He was an adored mainstay at Fisher’s Produce, delighting customers and staff alike. He took great joy spending time with his beloved grandchildren, great-grandchildren and, most importantly, “supervising” the family farm. He is also survived by a brother Gery and his wife Carol of Fleetwood and a sister Eloise of Fleetwood. Funeral services will be private. In lieu of flowers contributions can be made in Steve’s honor to Salem United Church of Christ, 307 Covered Bridge Road, Oley, PA 19547. Stitzel Family Funeral Homes & Crematory, Inc., Oley is in charge of arrangements. For online condolences, visit www.StitzelFamilyFuneralHomes.com
Published by Reading Eagle from Apr. 27 to Apr. 30, 2020.
To plant trees in memory, please visit the Sympathy Store.
MEMORIAL EVENTS
To offer your sympathy during this difficult time, you can now have memorial trees planted in a National Forest in memory of your loved one.
Funeral services provided by:
Stitzel Family Funeral Homes and Crematory, Inc - Oley
MAKE A DONATION
MEMORIES & CONDOLENCES
Sponsored by Stitzel Family Funeral Homes and Crematory, Inc - Oley.
7 Entries
To the Fisher family, my prayers are with you all,
Cheryl Manella
Classmate
May 2, 2020
I found this clipping among my mothers' things. I've kept it, too. As with the dear friends of the Fishers "Down Oley Way," our parents and my big brother, Steve lived "Down to Earth.". "Dear Friends: When we die, all of us will leave an inheritance - some money and some memorabilia - which will constitute our estate However, we can also choose to leave a legacy - a set of values, morals, traditions and principles for the future generations of our family. An inheritance will be gratefully received, enjoyed, and spent by our children, but a legacy will mark them for eternity. An inheritance is treasure stored up on Earth; a legacy is treasure stored "in heaven, where neither moth nor rust doth corrupt." (Matthew 6:20). -The Rev. Erich Becker, Lutherville,Md.
Eloise Fisher
April 30, 2020
We three Bernstel kids, Jack, Bobby & Marcia all attended school at Oley with Steve and Gery. We all rode the bus together and lived "over the hill" from each other. We grew up together in the great village of Yellowhouse. Steve will be missed by everyone who knew him.
Robert Bernstel
April 29, 2020
A life well lived. Thank you to all you brought to this world throughout your short time here. May you find peace in your eternal home. Sympathy to the family ... Magisterial District Judge Gail Greth
April 28, 2020
To the Fisher Family:
Our hearts are reaching out to you
for what you're going through.
Steve was a fun loving, special person and
Gary and I were fortunate to have known him
growing up in Oley Valley, the Fair
and the Produce stand.
Let the great memories of Steve take away
the tears and bring back the smiles again.
God Bless.
Gary and Linda (Schlegel) Reinert
Gary and Linda Reinert
April 28, 2020
Margie and family,

Our deepest condolences to everyone. Steve and I went to school together from 1st to 12th grade. He was one of my favorite classmates. Always friendly to everyone. He will be missed by many people.

Jane (Hoch) Valeriano and husband Larry
April 28, 2020
Sorry to read of passing of Steve! My thoughts and prays with family!
He will be missed my many!
Dolores (Endy) Hagge
Litchfield Park, AZ
April 28, 2020
Showing 1 - 7 of 7 results