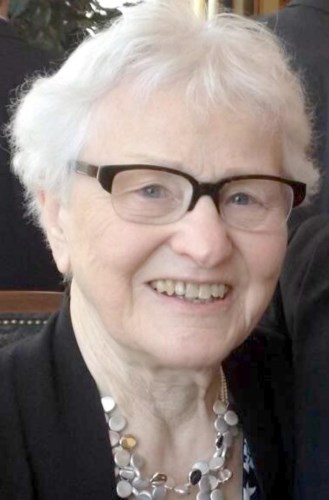 BORN
1933
DIED
2021
FUNERAL HOME
John J. Ferry & Son
88 East Main Street
Meriden, CT
Corinne Purcell Brysh, 88, of Meriden, passed away peacefully on Wednesday, November 24, 2021. Born on May 10, 1933 in White Plains, New York, she was the daughter of the late Thomas J. Purcell and Germaine (Raby) Purcell. She was predeceased by her husband, Robert B. Brysh.

Corinne was a graduate of Mount Saint Joseph Academy in West Hartford, class of 1951. She attended The College of Mount Saint Vincent in Riverdale, New York and graduated in 1955 from the Teacher's College of Connecticut in New Britain. Corinne was an active parishioner of St. Rose Church, Meriden where she was a member of the parish council and assisted with many social events including the annual St. Patrick's Day dance. She later became a member of Mary Our Queen Church in Southington and most recently at Our Lady Queen of Angels in Meriden. She was employed by the Meriden School System as a teacher at Israel Putnam School. She later worked at both The American Heart Association and The American Diabetes Association until retirement.

Corinne was a former member of the American Association of University Women and the Connecticut Education Association. She was honored to have served on the Distribution Committee for the Cuno Foundation which distributes grants to non-profit organizations as well as scholarships for local high school students attending college.

Corinne's main delight in life was her family who gave her such pleasure and pride and her friends with whom she shared so many wonderful times. Known among her family and friends as "Keenie," her favorite memories included spending time at Knollwood Beach in Old Saybrook, the YMCA Outdoor Center and the Mountain Grove Swim Club. She was an avid reader and book club member as well as a crossword puzzle enthusiast. Corinne was a devoted Notre Dame fan and enjoyed following the UCONN Women's basketball team.

She is survived by her daughter, Kathleen B. Davenport and her husband, Morris, of Avon; her son, Theodore R. Brysh and his wife, Marcia, of Guilford; her five grandchildren who called her "Mim," Caroline, Meredith, Andrew, Blake, and Grayson; a brother, Thomas J. Purcell and his wife, Ann, of Meriden; as well as several nieces and nephews.

Family and friends are invited to attend a Memorial Mass to be held on Saturday, December 11, 2021 at 11:00 am at Our Lady Queen of Angels Parish, St. Joseph Campus, 109 Goodwill Avenue, Meriden. There will be no calling hours and burial will be private. In lieu of flowers, expressions of sympathy in her memory may be made to St. Jude Children's Research Hospital, 501 St. Jude Place, Memphis, TN 38105. Arrangements are under the direction of the John J. Ferry & Sons Funeral Home, 88 E. Main St., Meriden, CT 06450. For online condolences, please visit jferryfh.com.

Published by The Record-Journal from Dec. 5 to Dec. 7, 2021.
To plant trees in memory, please visit the Sympathy Store.
MEMORIAL EVENTS
Dec
11
Memorial Mass
11:00a.m.
Our Lady Queen of Angels Parish, St. Joseph Campus
109 Goodwill Avenue, Meriden, CT
Funeral services provided by:
John J. Ferry & Son
MAKE A DONATION
Please consider a donation as requested by the family.
MEMORIES & CONDOLENCES
Sponsored by John J. Ferry & Son.
2 Entries
May your memories of the wonderful times you shared with your loved one comfort you and your family, today and always.
American Heart Association
December 8, 2021
I am saddened to learn of Keenie´s passing. I have many fond memories of your mother and father at Mountain Grove. May her memory be a blessing to your family.
Cheryl Watson
Friend
December 5, 2021
Showing 1 - 2 of 2 results