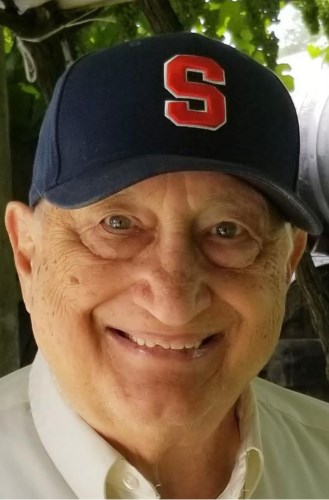 Never was there a man so interested - or interesting. Born in Waterbury, CT, on June 15, 1933, Dante approached life with gusto. He was the son of the late Michael and Rachel (Ciavarella) Carrafa, and was raised in Waterbury, along with his 11 siblings, in a house on Citizens Avenue, where large family get-togethers were an everyday occurrence and there was always room for one more at the table. He graduated from Mary Abbott Grammar School and Wilby High School, and attended the University of Connecticut. Over the course of his life, Dante was a successful businessman, entrepreneur, and public servant. As a young man, he was a photographer and sportswriter for the Naugatuck Daily News and the Waterbury Republican-American. He began his career in manufacturing as a tool designer and went on to start and manage successful companies that served the aerospace industry, including LCM Tool Company, National Tool Company, Cambridge Specialty Company, and Gemini Tool. He is a past president of the Smaller Manufacturers Association of CT, and owned and operated Dan's Top Dog restaurant in Southington. Dante served in the U.S. Army and U.S. Army Reserve for nearly 20 years, attaining the rank of captain. In Waterbury, the city he loved and served in many capacities for many years, he was Zoning Commissioner. He twice ran for State Senate. Dante was a people person who could talk to anyone. He loved making introductions and connecting people. He was known for his kindness, generosity, and sense of humor, as well as more than a few signature catchphrases, like "What luck!" He was a New York Yankees fan; lifelong member of the Waterbury Elks club; former member of Wethersfield Country Club and Indian Hill Country Club; lover of and participant in the arts and community theater, a passion he shared with and developed in his children; and benefactor of the Franciscan Sisters of the Eucharist, whose annual sports banquet he always looked forward to attending, and Sacred Heart High School, whose Carrafa-Tuttle scholarship fund was named in his honor. He was also a lifelong learner, who would discover something he wanted to do or know, attack it with passion, and master it in no time, adding pilot, wine connoisseur, golfer, military history buff, concert promoter, and more to his list of achievements. Besides his wife, Monica, Dante leaves his beloved children and their spouses: Cynthia and Anthony Petrello of Houston, TX; Dante, Jr. and Ann Marie Carrafa of New Hartford, CT; Valerie and Ben Barker of West Simsbury, CT; and Kimberly and Mike Russ of Kerrville, TX. He leaves 10 grandchildren: Carena; Dante III and his wife, Lisa; Derek and his fiancée, Kathryn; Devin; Leah and her fiancé, Rory; Alana; Evan; Peyton and his wife, Sarah; Isabelle; and Truly; as well as two great-grandchildren: Dante IV and Santino. He leaves his brother and sister-in-law Joseph and Wendy Carrafa; sisters Mary Imbimbo and Anita Disisto; sister-in-law Rosemarie Carrafa; and former wife, Charlotte Carrafa. He is also survived by several brothers-in-law, other sisters-in-law, nieces, nephews, a large, loving extended family, and many dear lifelong friends who will miss trips to Saratoga, concerts in the park, happy hours on the deck, and other fun times with Dante.

He was predeceased by his brothers Matthew, John, Michael, Eugene, Victor, and Alfred Carrafa, and his sisters Lucia and Elaine Carrafa.

Memorial contributions in his memory may be made to The Franciscan Sisters of the Eucharist, 405 Allen Avenue, Meriden, CT 06451.