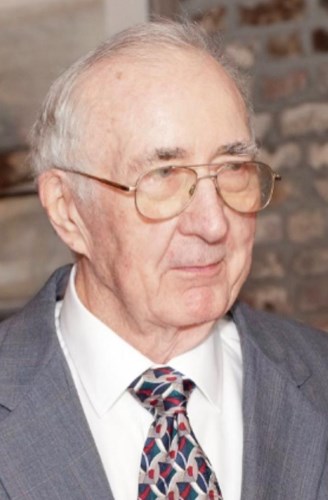 BORN
3/2/1931
DIED
8/25/2021
FUNERAL HOME
Wallingford Funeral Home
809 North Main Street Ext.
Wallingford, CT
Edward J. Breen, 90, of Wallingford, died peacefully at his home, Wednesday, August 25, 2021. He was the loving husband of Margaret E. (Stubb) Breen. Ed was born in Mineola, NY, March 2, 1931, a son of the late William J. and Elizabeth (Reilly) Breen and was a U.S. Navy Veteran of the Korean War. He retired after 40 years of employment as Regional Account Executive with Best Plumbing Specialties of Maryland. He was an avid golfer and former member of the Farms Country Club in Wallingford, CT. In addition to his wife Margaret, Ed is survived by his brother, Bernard Breen (Sissel), daughter, Patricia Breen; his son, Edward (Caren) Breen and his son, Thomas (Elizabeth) Breen; his grandchildren, Sean Breen (Virginia), Trevor Breen (Elizabeth), Danielle (James) Marino, Reilly Breen, Ted Breen, Nathan Breen, and Zoe Breen, and eight great-grandchildren. Ed was predeceased by his two brothers, William J. Breen II and Michael Breen, and by his three sisters, Eileen Lowell, Elizabeth Nelson and Barbara Duff. A Mass of Christian Burial will be celebrated Wednesday, September 8th, at 11 am, directly at Most Holy Trinity Church, 84 N. Colony St., Wallingford. Interment with military honors will follow in the State Veterans' Cemetery in Middletown. In lieu of flowers, gifts in his memory may be sent to Most Holy Trinity Church, c/o the parish center, 25 N. Whittlesey Ave., Wallingford, CT 06492. Arrangements are under the direction of The Wallingford Funeral Home. www.wallingfordfh.com

Published by The Record-Journal from Sep. 5 to Sep. 6, 2021.
To plant trees in memory, please visit the Sympathy Store.
MEMORIAL EVENTS
Sep
8
Mass of Christian Burial
11:00a.m.
Most Holy Trinity Church
84 N. Colony St., Wallingford, CT
Funeral services provided by:
Wallingford Funeral Home
MAKE A DONATION
MEMORIES & CONDOLENCES
Sponsored by Wallingford Funeral Home.
1 Entry
tom, sorry to hear of your dads (thumper)and moms passing.came across it when i was searching for a way to get in touch with you. tried to find you in the past with no luck. last i knew you were living in california. would like to hear from you . if you get this give me a call 203 597-1072 or email [email protected] or text 203-419-5398. sorry to use this venue as a way to get in touch but its my best shot. your old friend,Mark
Mark Hopkins
Friend
September 14, 2021
Showing 1 - 1 of 1 results