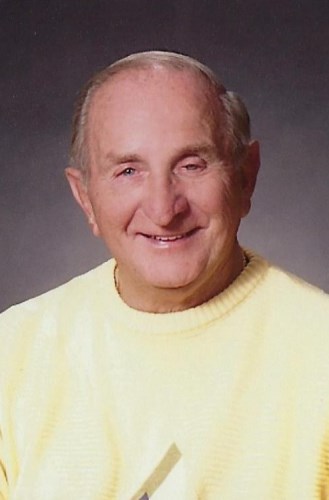 BORN
1933
DIED
2021
FUNERAL HOME
Meriden Memorial Funeral Home
450 Broad Street
Meriden, CT
John A. Marut, 88, passed away peacefully on Thursday, September 16, 2021, with his family by his side. He was the husband of Barbara (Tyskowski) Marut, his loving wife and best friend of 64 years.

John was born on July 22, 1933 in New Britain. He was the son of the late John A. and Agnes (Bajek) Marut, Sr. John was a longtime resident of Meriden and devoted parishioner of St. Stanislaus Church. He was a partner at C&A Machine Company in Newington from where he retired. John was a Past President of the Holy Name Society and a member of the St. Faustina Sunshine Club and Finance Committee. He was a longtime member of the Shuttle Meadow Country Club. Most important to John was spending time with his family and friends. A beloved husband, father, grandfather and great-grandfather, John will be greatly missed.

His funeral will be held on Tuesday, September 21st at 11:00 a.m. from the Meriden Memorial Funeral Home, 450 Broad St., Meriden, when the funeral cortege will proceed to St. Stanislaus Church for a Mass of Christian burial at 11:30 a.m. Burial will follow in St. Stanislaus Cemetery. Family and friends are invited to pay their respects on Monday evening September 20th from 4:00 p.m. until 8:00 p.m. at the Meriden Memorial Funeral Home. To send an online expression of sympathy, please visit meridenmemorialfh.com.

In lieu of flowers donations in memory of John Marut may be made to St. Faustina Parish, 82 Akron St., Meriden, CT 06450 or to The Alzheimer's Association at www.alz.org/

Published by The Record-Journal from Sep. 18 to Sep. 19, 2021.
To plant trees in memory, please visit the Sympathy Store.
MEMORIAL EVENTS
Sep
20
Visitation
4:00p.m. - 8:00p.m.
Meriden Memorial Funeral Home
450 Broad Street, Meriden, CT
Sep
21
Funeral
11:00a.m.
Meriden Memorial Funeral Home
450 Broad Street, Meriden, CT
Sep
21
Mass of Christian Burial
11:30a.m.
St. Stanislaus Church
CT
Funeral services provided by:
Meriden Memorial Funeral Home
MAKE A DONATION
Please consider a donation as requested by the family.
MEMORIES & CONDOLENCES
Sponsored by Meriden Memorial Funeral Home Stempien and Smith-Ruzzo Funeral Homes.
3 Entries
Barbara and Family so sorry to hear of John's passing, our love, thoughts and prayers to you all in the loss of your husband, father, grand pa and our wonderful friend. God Bless
Kathy & Glenn Centola
September 20, 2021
Bara and family I am so sorry for the lost of John we did have a lot of fun in Poland May he RIP elizabeth
Elizabeth Bellante
Friend
September 19, 2021
Sincere Condolences to the Marut family for your family's loss. May John Rest In Peace & God Bless you all during this difficult time
Lorraine Cherniak
Other
September 18, 2021
Showing 1 - 3 of 3 results