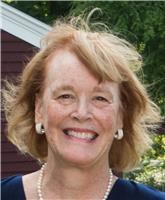 Leslie Cheryl Anderson Scherer, 71, of Wethersfield, CT, passed away on September 8th after a valiant battle with cancer.

She was born in Meriden, daughter of the late Leslie E. and Edith L. Anderson. Leslie graduated from Maloney High School in 1966, where she was voted "most likely to succeed," and Phi Betta Kappa with a B.A. in Economics from Colby College in 1970. While at Colby she met her husband of 49 years, Edward Scherer, decided to become a librarian, and deepened her love for the outdoors.

She earned her Master of Library Science from Rosary College (now Dominican University) before returning to Connecticut to join the Wallingford Public Library in 1974. Four years later, at the age of 30, she became the library's director, a job which for many years following the births of her children she shared with her dear friend and colleague Karen Roesler in a pioneering "job share" arrangement. During her 38-year career in Wallingford, she spearheaded the library's move to its current location, oversaw a total renovation and expansion, and shepherded the library into the digital age, including through her role as a founding director of Libraries Online ("LION"), Connecticut's digital interlibrary loan program.

She will be remembered for her grace, warmth, practicality, thirst for knowledge, and commitment to family, friends, and her community.

She is survived by her devoted husband; her son and daughter-in-law, Peter and Caroline Scherer; her daughter and son-in-law, Elizabeth and Eric Richmond; her grandchildren Edward Scherer, and Charles and Dashael Richmond; her brother and sister-in-law, Richard and Janice Anderson; nephew and his wife, Christopher and Laurie Anderson; loyal cousins and many wonderful friends-all of whom she wished to thank for their love and support over the past 18 months.

Memorial contributions can be made in Leslie's name to your local public library, the Connecticut chapter of the Nature Conservancy, or the charity of your choice.
Published by The Record-Journal from Sep. 15 to Oct. 15, 2019.
To plant trees in memory, please visit the Sympathy Store.
MEMORIAL EVENTS
To offer your sympathy during this difficult time, you can now have memorial trees planted in a National Forest in memory of your loved one.
MAKE A DONATION
Please consider a donation as requested by the family.
MEMORIES & CONDOLENCES
8 Entries
Leslie was one wonderful library colleague. She was smart, hardworking and dedicated to making Wallingford Library the best it could be. Clearly, the people of Wallingford liked the services provided because I never visited that library without seeing a parking lot packed with cars. We will miss her as a professional colleague, and also as a person we looked forward to chatting with.
Vince Juliano
September 23, 2019
So sorry for your loss - I always admired Leslie.
Gale Bradbury
September 23, 2019
The world has lost a beautiful woman! May the fond memories of her many attributes bring some comfort to her family and all who loved her.

Dick & Laura Ashton
September 18, 2019
I was sorry to hear of Leslies death. Thinking of you all brings back many fond memories of years at Charles Wright School: PTA, especially the May Fair, Cub Scout activities, book fair and on and on. She was a fine person whom I was proud to know and work with. Sending love to you all.
Kathy Gourlie
Friend
September 18, 2019
May the love of friends and family carry you through your grief.
September 17, 2019
She was a wonderful friend from middle school on. Have fond memories of her parents, hanging out at Les' and fun during high school with Sandy and the rest of our group. She was lovely and a no nonsense type like her mother-always a good friend.
Susan J. Logozzo -Schmid
September 16, 2019
What a beautiful photo.So typical of her wonderful smile.She will be greatly missed by all her fellow Eagle Campers. Our sincere condolences on this loss....way too soon. Our prayers are with your family at this difficult time. The Evans family.
Chris Evans
September 15, 2019
Our deepest sympathies to the entire family. We share many wonderful memories of Leslie from Eagle Camp. Our thoughts and prayers are with you. The Kolodner family
Elinore Kolodner
September 15, 2019
Showing 1 - 8 of 8 results