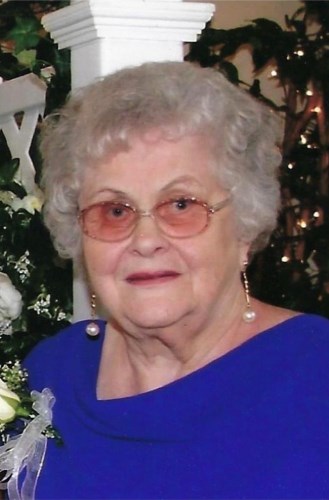 Born on March 28, 1931, she was the daughter of the late Sylvester Markowski, Sr. and Ann Markowski. A lifelong resident of Meriden, Winifred was a graduate of Meriden High School, Class of 1950 and a parishioner of St. Stanislaus Church. She worked for Canberra Industries from where she retired after many years of service. Winifred enjoyed sewing, working with ceramics and cooking. She was known for her delicious meatballs. Most important to Winifred was caring and spending time with her grandchildren. A loving mother and grandmother, she will be greatly missed.

She is survived by her children: David B. Tacinelli and his wife Angela of Meriden, Paul J. Tacinelli and his wife Chris of FL, Lori A. Pisani and her husband Larry of Southington; her sister Rita Petrucelli; seven grandchildren: Gina, PJ, Jason, Ashley, Christina, Daniel, Jordan; eight great grandchildren including her special great granddaughter Alexia and numerous nieces and nephews. She was predeceased by her brother, Sylvester Markowski, Jr. and her sister, Lois Trudel.

Her funeral will be held on Monday, September 20th at 10:30 a.m. from the Meriden Memorial Funeral Home, 450 Broad St., Meriden, when the funeral cortege will proceed to St. Stanislaus Church for a Mass of Christian burial at 11:00 a.m. Burial will follow in St. Stanislaus Cemetery. Family and friends are invited to pay their respects on Monday morning from 9:00 a.m. until 10:30 a.m. at the Meriden Memorial Funeral Home. To send an online expression of sympathy, please visit meridenmemorialfh.com. Donations in memory of Winifred Tacinelli may be made to St. Faustina Parish, 82 Akron St., Meriden, CT 06450.

Published by The Record-Journal from Sep. 17 to Sep. 18, 2021.
To plant trees in memory, please visit the Sympathy Store.
MEMORIAL EVENTS
Sep
20
Calling hours
9:00a.m. - 10:30a.m.
Meriden Memorial Funeral Home
450 Broad Street, Meriden, CT
Sep
20
Funeral
10:30a.m.
Meriden Memorial Funeral Home
450 Broad Street, Meriden, CT
Sep
20
Mass of Christian Burial
11:00a.m.
St. Stanislaus Church
CT
Funeral services provided by:
Meriden Memorial Funeral Home
MAKE A DONATION
MEMORIES & CONDOLENCES
Sponsored by Meriden Memorial Funeral Home Stempien and Smith-Ruzzo Funeral Homes.
5 Entries
Dave, we are so sorry for the loss of your mother. Our thoughts and prayers are with you. May you find comfort in the arms of our Savior, Jesus!!! Rod, Tarie and Jake
A1HandymanPlus
September 24, 2021
Lori, my thoughts and prayers are with you at this time. Your mom was so sweet and loving. She is now with your dad! How they loved each other
Terri Steele
Friend
September 20, 2021
Lori & Family, Sending my sincere condolences to you and your family for the loss of your Mom. I remember the many times that she would chaperone our class trips during our great days at St Stan's. She was a very sweet person. Cherish all the good times and memories you have with her and your family. She's your Guardian Angel who will continue to watch over you all. God Bless and again My Condolences
Lorraine Cherniak
Friend
September 18, 2021
My sincere condolences to your family. I always loved Winnie she was a saint. I know she has a special place in Heaven.
John DeSandre
September 17, 2021
I am so sorry to hear this. "Wini" was the best at knowing the history of the Markowski family. I will miss hearing about what was going on. May God bless you always.
John Markowski Jr.
September 17, 2021
Showing 1 - 5 of 5 results