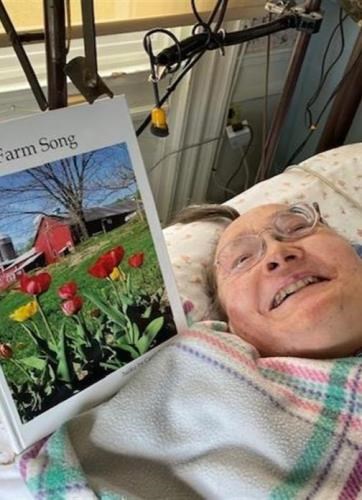 BORN
1949
DIED
2020
ABOUT
Mohawk Trail Regional School
Carol Anne Purington of Colrain passed away on December 8, 2020 at home with family by her side after a period of declining health. She was 71 years old.

Carol was born on November 16, 1949, in the house on Woodslawn Farm in Colrain, Massachusetts where she lived for almost all her life. She was the third of eleven children born to Herbert and Barbara (Page) Purington. Carol enjoyed a happy early childhood playing with her siblings and cousins, and helping with farm chores and housework suitable for a young child. She spent many hours in the outdoors, developing a lifelong love of the natural world and a heightened sensitivity and abiding love for the changing of the seasons characteristic of her agrarian New England home.

In September 1955, on her first day of first grade, Carol experienced the first symptoms of what would be a severe case of polio that would affect her for the rest of her life. She was hospitalized for two years, first at the Franklin County Public Hospital in Greenfield, and then at two hospitals in Boston. Her body was left almost completely paralyzed. For the rest of her life she breathed with the assistance of ventilators, including an iron lung and its modern variations, and for the majority of the time, she was confined to lying flat on her back.

Carol was able to come back to Colrain in 1957. For two years she lived in Colrain Center, next to the Griswold Memorial Library, with her grandmother, Cynthia Hillman, and her aunt and uncle, Evelyn and Art Sellers. When the necessary modifications to the old farmhouse on Wilson Hill Road were made to accommodate her needs, she could finally return home. There, for over six decades the downstairs front parlor became her room, the center of her world. From her windows she could see the family garden and a large bird feeder. A tilted mirror attached to her bed enabled her to see all parts of her room and into the living area of the house. The walls of her room were adorned with family photos and artwork, and bookcases held a vast library.

In the 1950s and 1960s education for disabled children was not always available. But because of the perseverance of her parents, Carol was able to pursue her education thanks to the cooperation of school officials, a home-school telephone connection, and tutors. Much of her homework was written using a mouthstick with an attached pen. She completed 12 years of education, graduating from Mohawk Trail Regional School in 1970. She then continued her education taking classes through Greenfield Community College.

From childhood Carol was enchanted with books. Her mother read aloud to all the children, and their collection of children's books was supplemented by borrowing books from the Western Massachusetts Regional Library bookmobile that visited the farm every six weeks. As she learned to read, she found great and lasting pleasure in exploring the world through works of literature, history, and theology. She always looked forward to engaging with others in conversation and discussions of books that they had read in common, especially works of history.

Carol also enjoyed writing - everything from family letters and Western forms of poetry to the Japanese forms of haiku, tanka, and Taranga. Mail and email connected her with countless members of the world-wide English-language haiku/tanka community. Her poems in these genres appeared in many journals and won recognition in international contests. Carol found deep satisfaction in self-publishing over ten books of poetry and prose. Among them, Away from Home was an account of the period she spent in Boston following her polio diagnosis. Farm Song, published in 2020, is her masterpiece, an interweaving of haiku and photographs of Woodslawn Farm and rural life from family and friends. She also co-edited with Susan Todd the anthology, Morning Song, Poems for New Parents.

In her early teens Carol took to heart the teachings of the Bible and became a believer and follower of her Lord and Savior Jesus Christ. She committed her life to Him, and her faith gave joy and stability to her life. She belonged to the Colrain First Baptist Church. Friendship with its members and many other Christians was a source of strength. Throughout her life she received regular visits from her pastor and other church members for Bible study and prayer.

Carol was always amazed with what advantages the onset of the computer age and digital technologies brought to disabled people like herself. She was able to write, submit, and publish because of the advancements in these technologies. She worked first with typewriters operated by a couple of her fingers and a stick she could hold with her mouth, but she eagerly switched to a word processor with trackball mouse when that was available. The next step was a voice-operated computer. For years she had a speaker phone that kept her connected to friends, and she more recently moved to an iPhone and FaceTime calls. Modern technologies over the years and skilled family members also gave Carol a degree of independence by allowing her to use push buttons and voice activation for phone use, control of lights in her room, and listening to music or talking books.

Carol enjoyed many of the simple things in life such as listening to music of many genres, family singing of carols at the annual family Christmas gathering, the variety of potluck foods that were brought to the large family gatherings, and listening to the Red Sox games on the radio.

Visits from family, friends, neighbors, as well as poets, writers, and strangers were regular parts of Carol's days. No one came away from her presence without being uplifted and impressed by her spirit. Whatever challenges her soul endured, she was invariably cheerful, funny, sophisticated, empathetic, compassionate and quick to bring comfort and offer a kind word to any visitor. She was the most devoted friend anyone could ever have, always interested and interesting and not above a bit of lighthearted gossip.

A diversity of people gravitated to Carol and connected not just to her but to one another through and because of her. One outgrowth was the creation of the Winter Players for which a priest, a poet, a therapist, a librarian, an artist, and a teacher assembled in Carol's room once a month from January to March to perform plays for her - the Greeks, Shakespeare, Chekhov, Sartre, Beckett, to name a few.

Carol, being the 3rd oldest of 11 children in the family, spent a lot of time interacting with her siblings and watching them grow up, especially her six youngest brothers. They would often play in her room while their mother was caring for Carol, and she could also watch them in her mirror playing with the toys in the hall just outside of her room. In a way, she was like a second mother to some of them. Years passed and nieces and nephews came to visit and know their Aunt Carol, and then years later, her grandnieces and grandnephews arrived. She loved cradling the newborns in the crook of her arm and watching them grow and play. And they loved their Aunt Carol, talking to her, showing her things, and when they were big enough, being able to sit at the table close to her bed and play or talk with her.

Carol wasn't always confined to her room. Her parents would put her onto her stretcher and load it into the family station wagon. Then they would be off, maybe just for a scenic drive, especially to view the fall colors. Other trips off the Hill were to a family Thanksgiving or Christmas gathering, a sibling's grade school or high school graduation, a relative's wedding or new home, her parents' 50th wedding anniversary party, or a family reunion. In the summer her stretcher would be carried outside to the shade of the maple trees on the lawn where she could enjoy the beauty and fresh air of the farm.

As she grew older, Carol spent less time outdoors, but she continued to stay in touch with her natural surroundings through family stories and photos and the faithful community of birds that came to the feeders outside her windows. She had visits from kittens, puppies, miniature horses, and a black squirrel. More than one cocoon was placed at her eye level so she could watch close up as a monarch butterfly unfurled its wings.

Carol received loving and devoted care from all of her family, but especially from her amazing mother. In recent years, the family has been assisted by many outside caregivers, with Carol's special recognition to Karen Connor, Brittany Bristol, and Christine Sessions for their attention the last few months. And the family extends special gratitude to Dr. Richard Warner, friend and physician, for his care and support. It was because of this care in her own home and the mercy of God that she never spent a night in a hospital between 1957 and her death.

In 2002 the Mary Lyon Foundation surprised Carol by presenting her with its James Boulger "Spirit of Adventure Award." She received the Distinguished Alumnus Award from Greenfield Community College in 2007, to her gratitude and, also, astonishment.

Polio may have crippled Carol's body, but it didn't control her mind or spirit. Carol's legacy is a testament to the indomitability of the human spirit. For someone so physically challenged, yet so accomplished as a writer and a person, she should be an inspiration to all, to strive in spite of what limitations we have, to make the best of the life we are given.

It is traditional for a haiku writer to leave behind a death poem:

to the spring evening

Arrangements are under the care of Smith-Kelleher Funeral Home in Shelburne Falls. A celebration of Carol's life will be held at a later date when we are all able to gather together safely.

Cards and messages of condolences can be sent to the Purington family at 152 Wilson Hill, Colrain, MA 01340 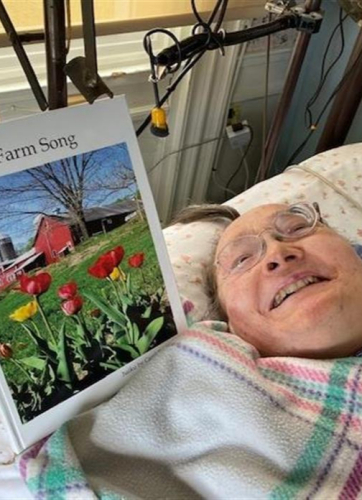 Published by Recorder on Dec. 10, 2020.
To plant trees in memory, please visit the Sympathy Store.
MEMORIAL EVENTS
To offer your sympathy during this difficult time, you can now have memorial trees planted in a National Forest in memory of your loved one.
MAKE A DONATION
MEMORIES & CONDOLENCES
3 Entries
To my sweet and lovely friend, Carol, who are always my inspiration and in my heart.

Ling (Arms Academy, Shelburne Falls, MA.1965-1966)
Dararatt Anantanasuwong
Bangkok, Thailand
December 14, 2020
Dararatt - Anantanasuwong
Friend
December 14, 2020
She was an inspiration to my third grade class when I taught at the Lander-Grinspoon Academy in Northampton (previously the Solomon Schechter Day School). We wrote poems that we shared with her, in person, my students surrounding her, some even sitting with her on the bed! We were among the many lucky people who were touched by her warmth, humor and generosity of spirit. I will never forget that day.
Debbi Friedlander
Acquaintance
December 11, 2020
I had the pleasure of interviewing Carol many years ago. Sad to hear of her passing, and condolences to her family: http://www.eric-goldscheider.com/id23.html?fbclid=IwAR07X-B-uuJH08laW4owCB-vV-1SyxZZgUQBT5Ez6p_6O8JYMOVxfcu7JgI
Eric Goldscheider
Acquaintance
December 10, 2020
Showing 1 - 3 of 3 results