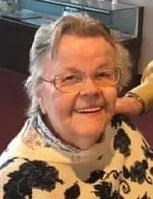 A native of Greenfield, she was born on June 13, 1935 to Burnice (Wood) and Stanley Crosier. Charlotte attended Greenfield Public Schools, graduated from Greenfield High School in the Class of 1953 and furthered her education and received a B.A. in Education. Charlotte pursued a career in nursing and attended the Franklin County Hospital School of Nursing and received her certificate as a Registered Nurse. Upon her graduation from nursing school, she embarked on a career as a Registered Nurse and was employed for 14 years at the former Franklin County Public Hospital, Greenfield in the Obstetrics Department, later for the former Farren Memorial Hospital in Turners Falls and lastly, for Upjohn for a period of 5 years.

Charlotte was a member of the Order of Eastern Star, Spiritualist Minister at the Lake Pleasant Spiritualist Church, Past Commander of the Franklin County Civil Air Patrol, member of the Turners Falls Young Women's Club, organized Bike-a-thon to raise funds for intellectually challenged retired citizens, served as an OB Nurse and Upjohn Services Coordinator. Her greatest loves were her family, Long Beach in Rockport, MA, rainbows, her cats, Mahjong and Lobster.

In keeping with Charlotte's request for simplicity, visiting hours are omitted and her family will conduct a private service at their discretion. Memorial contributions in Charlotte's memory, are suggested to St. Jude's Hospital for Children on line at http://www.attude.com McCarthy Funeral Homes of Greenfield and Turners Falls, MA entrusted with the arrangements. Guest book and condolence message available at www.mccarthyfuneralhomes.com

Published by The Recorder on Sep. 17, 2021.
To plant trees in memory, please visit the Sympathy Store.
MEMORIAL EVENTS
To offer your sympathy during this difficult time, you can now have memorial trees planted in a National Forest in memory of your loved one.
Funeral services provided by:
McCarthy Funeral Homes
MAKE A DONATION
Please consider a donation as requested by the family.
MEMORIES & CONDOLENCES
4 Entries
I am sorry for your loss there will be a void in many lives, but Charlotte will live in in our minds and hearts. As we mourn Charlotte here the is a celebration going on in the Summerland because of her rebirth as she has gone home. 143 Charlotte
Susan Jan Banquer-Ferency
Family
September 20, 2021
Jeff, and family, I´m so very sorry for the loss of your Mom. May God heal all of your pain.
Marita
September 18, 2021
So sorry for the family´s loss. I have a great fondness for Rev. Charlotte. She greatly impacted my life by ordaining me in 2013. I am now a pastor of a Spiritualist congregation.
Rev. Elaine San Soucie
Friend
September 16, 2021
Dear Gordon, I am deeply sorry about your loss, may you have comfort, may you allow the peace of God to help you to cope with grief.
Harris
September 14, 2021
Showing 1 - 4 of 4 results