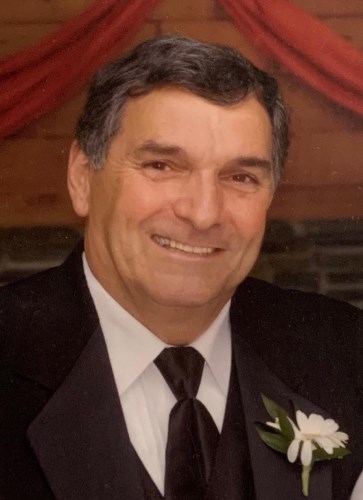 Born in Montague, Mass., on December 13, 1945, he was the youngest of eight children of Bertha (Dube) and Herman Letourneau. He graduated from Turners Falls High School in 1964 and attended Greenfield Community College in Greenfield, Mass. and Hudson Valley Community College in Troy, NY. He also became a licensed realtor. In 1997, he graduated with honors from Briarwood College in Southington, Conn., where he earned an associate's degree in mortuary science and became a licensed funeral director and embalmer.

He was predeceased in 2000 by his wife of 31 years, Charlene R. (York) Letourneau. They met in high school and were married in St. Anne's Church in Turners Falls on May 24, 1969, by the Rev. Clarence Forand. He is survived by his daughters Nicole Letourneau and Danielle Letourneau-Therrien, both of Greenfield; sons-in-law Matthew Cavanaugh and Marc Therrien; grandsons Jonah, 12, and Julian, 9; and sister Sandra Dube of Belchertown. He also leaves numerous cousins, nieces and nephews. He was predeceased by his brothers Edward, William, Herman, Robert, Brian and Bruce, and his parents, who died when Dean was still a young man. He was close with his mother-in-law, Gloria J. (Moody) York, who died in 1999, and his brother-in-law, Norman Dube, who died in 2018. He also leaves many dear friends.

Dean worked in paper mills and as a firefighter in Turners Falls, was manager for 18 years of Railroad Salvage stores in Turners Falls, Hadley, Chicopee and Connecticut. Later, he worked for several local funeral homes, assisting with funerals and as an embalmer. Most recently, he worked as a maintainer at the University of Massachusetts, Amherst, before retiring in 2013.

In 1980, he and Charlene built the house in Turners Falls where they lived most of their lives together and raised their children. After selling the house in 2012, Dean moved to Country Club Apartments in Turners Falls, and later the Arbors in Amherst, an assisted living facility, after his diagnosis with dementia. He lived at the Arbors until he moved to the Soldiers Home in 2016.

He was active with St. Anne's Church in Turners Falls and spearheaded a fundraising effort for its new steeple. He also organized and worked at most of the church's fundraising dinners and was a greeter and reader at church services. After St. Anne's Church closed, he joined Our Lady of Peace Church in Turners Falls, and continued his active involvement in the church community. He volunteered for the Missionaries of the Poor and traveled several times to Jamaica to carry out that organization's work there.

Dean volunteered for Hospice of Franklin County and community meals in Turners Falls. He donated goods and time to the former homeless shelter in Turners Falls. He donated furniture to the former After Hours Teen Center in Greenfield, which served Franklin County youth. He checked on his friends and neighbors often, especially the elderly. While working at Railroad Salvage, he was known to hire people, especially young people, when they needed a second chance in life.

His greatest joy in life was being a grandfather and a father. His favorite hobbies were spending time with his grandchildren, working in his yard, taking care of his pool, taking long walks and hikes around Poet's Seat Tower, collecting interesting items from yard sales and thrift stores, hosting family and friends at his house, and helping others with building or home-improvement projects, especially his daughters. He enjoyed eating out at local restaurants and was a regular at the Shady Glen. Dean loved animals, especially his dog, Zoey, who accompanied him almost everywhere. He was a writer, keeping a journal at various times in his life, including during his work with the Missionaries of the Poor, writing short stories and poetry since he was a young man, and taking writing classes through workplace education when he worked at UMass.

Dean had fond memories of family vacations and trips he and Charlene took over the years, including to Bermuda, Aruba, California, Montreal, Maine, Florida, New York, Cape Cod and various cruises. He visited his daughters when they lived in North Carolina, Virginia, and Washington D.C.

Under arrangements by Smith-Kelleher Funeral Home in Greenfield, a private service will be held this week at the convenience of the family. A memorial Mass will be planned at a later date at Our Lady of Peace in Turners Falls and the family will plan a celebration of Dean's life for his many extended family members and friends.

In lieu of flowers, memorial contributions are suggested to ServiceNet's Shelter and Housing Services, 131 King St., Northampton, MA, 01060 or the Friends of the Soldiers Home in Holyoke, PO Box 1338, Holyoke, MA 01041, [email protected]

Published by Recorder on Apr. 13, 2020.
To plant trees in memory, please visit the Sympathy Store.
MEMORIAL EVENTS
To offer your sympathy during this difficult time, you can now have memorial trees planted in a National Forest in memory of your loved one.
Funeral services provided by:
Smith-Kelleher Funeral Home Inc
MAKE A DONATION
MEMORIES & CONDOLENCES
17 Entries
My deepest sympathy goes out to Dean's family. He was very kind to our family especially when Nel died.
Josephine Bonnette
April 21, 2020
Nicole and Danielle,


My deepest condolences about your dad. I will miss Uncle Dean very much. I hope both of you and your families are well during this sad time.
Stephanie Letourneau
April 21, 2020
This is so sad to here! Dean was my neighbor on Dell St and a great neighbor at that ! My heart goes out to his girls I am so sorry!
Nancy Krug-Springer
April 19, 2020
May God bless you and your family in this time of sorrow.
Dale + Debra Mathey
April 18, 2020
We are so sorry for your loss. We remember Dean from Our Lady of Peace church and admired his strong faith and willingness to always help others.
Eileen and Paul Mariani
April 14, 2020
Danielle & Nicole:
I am very sorry to hear of your loss of your dad. My condolences to you both.
Donnie White
April 13, 2020
Iam so sorry to hear that Dean has passed knew him all my life I was related to him again im so for your loss Gail Gagne
April 13, 2020
Sorry for your loss. Dean was a great guy.
Craig Dalrymple
April 13, 2020
Sandy so sorry to hear of your loss.
Maureen Madden
April 13, 2020
So sorry for your loss. I knew your dad when he lived at the Arbors and have great memories of our chats as he would often come to the front desk to visit. Thoughts and prayers sent your way.
Mona Pion
April 13, 2020
I met Dean when I worked at the Survival center, he was a great man and always there to help. My condolences to his family .
Russ Doel
Friend
April 13, 2020
What a great guy he was ! He will be missed sadly I lost touch with him after he stopped working for Funeral Homes . My sympathys to his family
Helen Williams
Friend
April 13, 2020
Old friend from the mill
April 13, 2020
I knew Dean for quite a long time and worked with him at Railroad Salvage. He was a wonderful man. Prayers for comfort during this difficult time to his family!!
Pat Hastings Thompson
April 13, 2020
I will miss my friend Dean for many reasons. He had a profound influence in my life and I will always grateful for his friendship, wisdom and many laughs we had while in funeral school.
Tristan
Friend
April 13, 2020
Please accept my deepest condolences on the loss of your dad. May he rest in peace.
Bob Macellaro
Friend
April 13, 2020
What more could one ask for from a man's life?
Wid Perry
April 13, 2020
Showing 1 - 17 of 17 results