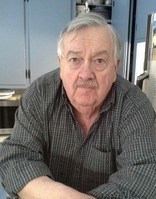 Greenfield, MA — Donald C. Thornton passed away on September 26, 2021 at Charlene Manor in Greenfield, MA following a difficult decline with dementia. Despite his strength of character he knew from the start it was one fight he wouldn't win. He was born in Hartford CT on February 10, 1945, the son of Roy E. Thornton and Emma Bagley Thornton. He grew up in Hartford and remained in Connecticut to later raise a family. He was an EMT and part time police officer in Rocky Hill Ct.

Later in life he moved to Massachusetts where he worked as an Investigator for a law firm. . His most recent employment was with the town of Northfield, Massachusetts as a Dog Officer.

His greatest passion in life was raising and training dogs. His favorite breed was the Golden Retriever. He was a well-known AKC judge, an obedience trainer and instructor.

He is survived by his daughter, Donna Leone of Manchester CT and son, Michael D. Thornton of East Newport Maine.

He also leaves behind his closest friend Sandy Gauld of Bernardston Ma and his Golden Retriever, Grace.

Private services will be held at the conveinence of the family.

Kidder Funeral Home, 1 Parker Ave. Northfield, Mass. Is in charge of arrangements. To send condolences please visit www.kidderfuneralhome.com.
Published by The Recorder on Oct. 1, 2021.
To plant trees in memory, please visit the Sympathy Store.
MEMORIAL EVENTS
To offer your sympathy during this difficult time, you can now have memorial trees planted in a National Forest in memory of your loved one.
Funeral services provided by:
Kidder Funeral Home
MAKE A DONATION
MEMORIES & CONDOLENCES
0 Entries
Be the first to post a memory or condolences.