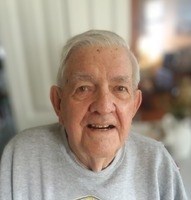 Earl was born in Buffalo, NY on May 29, 1930 and raised in Painted Post and Kenmore, NY. He graduated from Kenmore High School where he was recognized as an outstanding athlete in basketball and track. He valued and respected the lifelong lessons he learned from teachers and coaches.

Earl began his newspaper career in 1956 as district manager for the Buffalo Courier Express, Buffalo, NY. He was hired as circulation manager for the Binghamton Sun-Bulletin, Binghamton, NY, in 1969; circulation director for the Hornell Evening Tribune, Hornell, NY, in 1974; circulation director and assistant to the publisher for The Recorder, Greenfield, MA, in 1978. He helped establish the first youth soccer league in Greenfield. He was recognized by his peers and the community as "one of the good guys" when he retired from Greenfield in 1987. Earl and Elaine moved to Newfane after retirement where they enjoyed owning an antique store. He worked part time as a courier for Lockport Hospital and for Labor Relations Board Niagara County in Lockport.

Earl was a Presbyterian Church (USA) elder, former president of Sandy Beach Club, Grand Island, NY, lifetime member of the VFW, and a member of the Lions Club.

Earl enjoyed summers at Camp Allen on Lake Ontario in Olcott, NY where he served as president of the board of directors for several years.

Earl will be remembered as a loving and devoted husband, dad, grandpa, uncle and friend. He enjoyed singing and dancing to big band tunes, jazz music, whistling to Willie Nelson songs, and cheering for the Buffalo Bills and Buffalo Sabers. Earl lived life giving generously of himself with love, wisdom, a smile and always having a great story to tell.

Here's to the last of the good guys.

There will be no calling hours. A memorial service will be held at a later date. To honor Earl, please consider giving your time and talents to a favorite organization or charity.

Published by The Recorder on Oct. 16, 2021.
To plant trees in memory, please visit the Sympathy Store.
MEMORIAL EVENTS
To offer your sympathy during this difficult time, you can now have memorial trees planted in a National Forest in memory of your loved one.
MAKE A DONATION
MEMORIES & CONDOLENCES
2 Entries
Elaine, Earl, Laurie and Teddy, it has been many years since I had the pleasure of bing in the company of your husband and father Earl, but have the fondest memories and the highest regard of him. I offer my sympathies and hope you find comfort and strength in your family and faith.
Tom Farley
November 8, 2021
Our sincere condolences to the White family. My dear friend Elaine, I am so sorry for your loss ! Bob was honored to have worked for Earl at the Greenfield Recorder . You and Earl were always so caring to all .
Kathleen Harvey
October 18, 2021
Showing 1 - 2 of 2 results