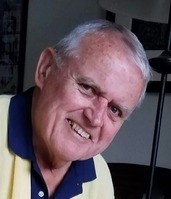 The son of Anne T. (Keane) Falvey, a homemaker, and John J. "Jack" Falvey, a Linotype operator at The Greenfield Recorder, Falvey was born at home during a winter storm on February 25th, 1937. Because it was a preterm birth, he was quickly transported by bus, with a hot water bottle to keep him warm, to the former Farren Memorial Hospital in Montague, where he was cared for until he could return home.

Known to family and friends as Jimmy, he graduated from Greenfield High School with the Class of 1955, and then earned an Associate's degree in Floriculture from the Stockbridge School of Agriculture, at the University of Massachusetts, Amherst, in 1957.

He enlisted in the U.S. Navy and worked as a radio operator on the destroyer USS Fred T. Berry (DD-858), which served tours with the 6th Fleet in the Mediterranean Sea, paying visits to ports in Spain, Italy, and Gibraltar. In later years, Falvey recalled time he spent on the Spanish island of Mallorca during his service with special fondness.

After his naval service Falvey lived in Boston for several years working as a salesman for the Arnold-Fisher wholesale florist company, and then took a job as a traveling salesman with the Pennock Company. Falvey remained at Pennock, at that time the leading wholesale florist company in the U.S., for 35 years, eventually serving as the manager of Pennock's Springfield location and as a member of the Board of the Pennock Corporation and as Board Secretary.

Through his UMass education and long experience in the florist business, Falvey had extensive knowledge of botany, and he could identify many plant species by both their common and Latin names.

He was also a gifted draftsman with an interest in civil engineering, a lifelong passion he satisfied by designing and overseeing the construction of five of his family's homes, in both South Deerfield and Greenfield. A communicant of Holy Trinity Church, Falvey was deeply proud of his Greenfield roots, and happiest when behind the wheel of a bright-red pickup truck running errands around town. A lover of animals, he was devoted to his pet cats and to his favorite rescue dog, Farah, and he kept boxes of treats to give to other dogs he encountered in his neighborhood.

He was predeceased by his sister, Mary (Falvey) Stebbins, of Danville Va., and his brother, John J. "Jack" Falvey, longtime pharmacist at Sullivan's Drug Store in Greenfield.

In addition to his wife, Pat, with whom he enjoyed 56 years of marriage, he is survived by daughter Kerry L. Falvey and her husband Peter Farley, of San Francisco, Calif; daughter Katey L. Falvey of Waltham, Mass.; nephew Kevin Falvey, of Santa Barbara, Calif.; and nieces Annie Falvey, of Greenfield, and Celine Maney of Oak Bluffs, Mass.

Calling hours will be Tuesday, Sept. 7 from 4 to 6 pm at the Smith-Kelleher Funeral Home, 87 Franklin St., Greenfield.

A Liturgy of Christian Burial will be celebrated Wednesday, Sept. 8 at 10:00 am, at Holy Trinity Church, 133 Main St., Greenfield with Rev. Douglas McGonagle as Celebrant and Rev. Timothy Campoli, Con-Celebrant. Committal prayers will follow in Calvary Cemetery in Greenfield.

To send flowers or a condolence, please visit www.smithkelleherfuneralhome.com

Published by The Recorder on Sep. 6, 2021.
To plant trees in memory, please visit the Sympathy Store.
MEMORIAL EVENTS
Sep
7
Visitation
4:00p.m. - 6:00p.m.
Greenfield funeral home
87 Franklin St, Greenfield, MA
Sep
8
Funeral Mass
10:00a.m.
Holy Trinity Church
133 Main St., Greenfield, MA
Funeral services provided by:
Smith-Kelleher Funeral Home Inc
MAKE A DONATION
MEMORIES & CONDOLENCES
3 Entries
Sorry for your loss Pat. You had a great man for many years. Ray has been gone for 12 12 1|2 years and it is still a big void in m life and always will be. Memories help a little but the loss never goes away. Love and Prayers TerriShepard Horta.
Teresa Horta
Friend
September 12, 2021
So sorry for your lost. Hope time and memories will heal you and your family.
Phyllis H Parker (szulborski)
September 9, 2021
Pat,Kerry,Katey and family ..... I am so very sorry for your loss ,you are all in my thoughts.... Peter Bartini
Peter Bartini
September 7, 2021
Showing 1 - 3 of 3 results