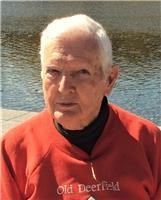 BORN
1918
DIED
2017
FUNERAL HOME
Wrisley Funeral Home
90 Sugarloaf Street
South Deerfield, MA
Leslie ""Les"" Linwood Thomas, age 98, quietly departed, at peace with the world and at home, on February 25, 2017. He was born in Portland, ME on November 30, 1918, son of Linwood Charles Thomas and M. Miriam Gookin Flood. These families of Welsh, English and Irish ancestry produced a long line of hard-scrabble farmers and salt-cured fishermen who lived along the southern coast of Maine. Les graduated from Biddeford High School (1936) and was the first in his family to attend college, graduating from Bates College, class of 1940. He met his future wife, Jean Fessenden of Wakefield, MA, at Bates and married her in April, 1943. They celebrated their 65th anniversary together before Jean's passing in October, 2007. Les started a long career as an English teacher at Biddeford High School in 1941.
During WW II, Les served as a Sergeant in the Army Air Force (1942-1945). He was about to ship out to the Pacific theater when the war abruptly ended. He later belonged to American Legion posts in Kennebunkport, ME and South Deerfield, MA. He returned to teaching at Biddeford High School (1952-1955), then moved his family to South Deerfield where he joined the faculty as an 8th grade English teacher when Frontier Regional High School first opened. During his 27 years of teaching in Biddeford, at Frontier (1956-1968) and then at Amherst High School (1968-1979), he shared his love of learning, reading and composition and took sincere interest in the lives of upwards of two thousand students. Over the years, many have conveyed the sentiment that ""Mr. Thomas was the best teacher I ever had.""
Les drew on his love of literature and history to serve the Town of Deerfield. In 1960, he was elected a Trustee of the Tilton Library, eventually becoming a permanent trustee – a position he held until 1988. He worked hard to improve the children's room in memory of his younger son, Paul, who tragically died in a car crash in Odessa, TX in 1981. After passing on the baton to other trustees, he remained committed to the library as a Friend of the Tilton Library, volunteer and flower arranger for the next 25 years.
When Deerfield residents voted to create a Historical Commission in 1972, he was appointed for the only three-year term and made Co-chairman. He held the post for four additional terms (1973-1987). After retiring from teaching in 1979, Les expanded his outreach efforts by becoming a docent at Historic Deerfield, where he worked with both adults and school groups. He was active in the Friends of Historic Deerfield and was a strong supporter of the Pocumtuck Valley Memorial Association's museum and library during the past 50 years.
Les joined the South Deerfield Congregational Church (UCC) in 1959, served as trustee, and was otherwise active for the next half century. He is fondly remembered for his generosity, concern for others, positive outlook and humor, for his artistic floral arrangements at Sunday services and for taking flowers to numerous residents throughout the community who were sick or unable to get about. He extended his community service through the South Deerfield Rotary Club, for which he served as secretary for several decades.
In his senior years, Les settled for volunteering wherever needed and being the consummate gentleman, all around nice guy, raconteur, wit, friend, companion and congenial fellow to his neighbors and friends throughout the community and beyond. His former students live from coast to coast.
He leaves behind a son, Peter A. Thomas, his wife, Marie, and grandson, Cameron Thomas, of Richmond, VT, and a grand-daughter, Jocelyn, her husband, Matthew Kramer, and three great-grandchildren, Isa, Elin and Gideon of Fairfield, CT.
A memorial service will be held at the South Deerfield Congregational Church, Saturday, March 18 at 11 a.m. Time will be provided for those who wish to share their memories of Les. Please let Peter know if you would like to speak ([email protected]) so that we can estimate the time. Plan to join us for lunch and pie - Les' favorite dish - in the parish hall afterwards. A memorial display and reception will also take place during the lunch hour in the Tilton Library located just next door to the church.
If you would like to give something in memory of Les, please consider a donation to the Tilton Library, 75 North Main Street, South Deerfield, 01373, or the PVMA Library, P.O. Box 428, Deerfield, MA, 01342 to support historic research in Deerfield and surrounding towns.
To plant trees in memory, please visit our Sympathy Store.
Published by The Recorder on Mar. 4, 2017.
MEMORIAL EVENTS
No memorial events are currently scheduled.
To offer your sympathy during this difficult time, you can now have memorial trees planted in a National Forest in memory of your loved one.
Funeral services provided by:
Wrisley Funeral Home
MEMORIES & CONDOLENCES
6 Entries
Les Thomas was so generous with his time and energy. He was extremely thoughtful also. I enjoyed knowing him for a number of years. My sympathy, Mary Currey March l8,2017 Greenfield, MA
March 18, 2017
Mr.Thomas was one of the first teachers that showed us what it meant to be a teacher. He had and deserved respect from all. Good Bye, Mr. Thomas.
Debbie (Baker) and Richard Swiatek
March 7, 2017
Les Thomas was your friend as soon as you met him He leaves a big void.
Donald Mathison
March 6, 2017
He was my 8th grade English teacher, and one of the class advisers during my senior year (1963). The sweetest, kindest teacher ever! Rest in Peace
Cheryl (Chapin) Kinney
March 4, 2017
I did know know Les Linwood Thomas but I wish I had; he was clearly a bright light that shown for many. My condolences to the family; my wishes for peace at heart and warm remembrances. Connie van Eeghen
Connie van Eeghen
March 4, 2017
My deepest sympathy, Alice Savage
Alice Savage
March 4, 2017
Showing 1 - 6 of 6 results