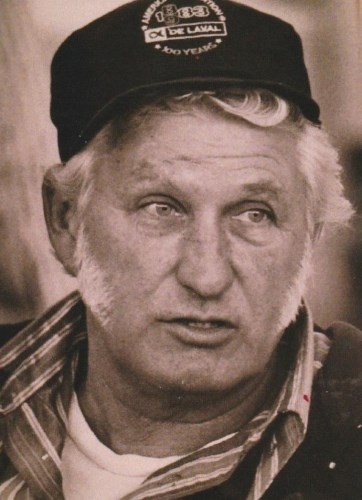 BORN
1931
DIED
2020
ABOUT
Smith Academy
FUNERAL HOME
Wrisley Funeral Home
90 Sugarloaf Street
South Deerfield, MA
Martin Holich Sr passed away after a brief illness on April 13, 2020. Born August 8, 1931, he was the son of John and Kristina (Sukup) Holich. Martin was married for 20 years and was the devoted father of Martin Holich Jr. of Raleigh NC, Sharyn Holich of Chicago, IL and Lynda Holich of Newton MA. He was the loving grandfather to two grandchildren: Andrea and Christopher Holich. He was preceded in death by his brothers John Holich Jr. and Milan Holich. Martin grew up in Hatfield, MA and made it his lifetime home. He attended Smith Academy, leaving after his freshman year to help on the family farm. He left the farm to start Holich Construction but came back to farming later in life growing about a dozen acres of tobacco well into his 70's. Martin spent his work life farming, manufacturing and installing septic tanks and renovating homes, even moving one in Whately. Through his work, Martin forged lifelong relationships with people throughout the Pioneer Valley. Martin was an avid tinkerer. He built his own wood stove, wind turbine and cultivator, the latter of which he obtained a patent for. Martin loved a good meal with fresh farmed food. He would frequently take Sunday rides with his kids around New England. He especially loved the Mohawk Trail. He had an internal GPS and knew the New England roads like the back of his hand. A private burial was held in Hatfield, MA on April 20. A Celebration of Life will take place later at a date and time to be announced.

Expressions of sympathy are available at: www.wrisleyfuneralhome.com
Published by Recorder on Apr. 20, 2020.
To plant trees in memory, please visit the Sympathy Store.
MEMORIAL EVENTS
To offer your sympathy during this difficult time, you can now have memorial trees planted in a National Forest in memory of your loved one.
Funeral services provided by:
Wrisley Funeral Home
MAKE A DONATION
MEMORIES & CONDOLENCES
8 Entries
Yep, , that picture is him and I remember where it came from ! What a great guy , had fun riding around in Amtrak with him . RIP , Marty .
Depot Dave
April 28, 2020
The Holich family - We were saddened to hear of your loss. Please know how very sorry we are.
Cliff and Carolyn Roberts
Friend
April 22, 2020
Marty was intelligent, funny and almost too stubborn a man. Poured concrete for him during my college summers. A very positive influence on my life. I can still hear him say, "Peter, stop and think what you are doing." Rest in peace.
Peter Paniczko
April 22, 2020
Marty,
Although I haven't seen you or your Father in many years. I was sorry to read about his passing, it's never easy to lose a parent. I Just wanted to send my condolences, along with my thought and prayers to you, your sisters and all of your immediate families.
Bill Hurley
April 21, 2020
My deepest sympathies.
Ray Goodrow
April 21, 2020
Condolences to your children and grandchildren... Martin and his family were our neighbors for many, many years. RIP Marty!!
Cynthia Goller
April 21, 2020
Paula J Lizek
April 21, 2020
Marty, sharyn and family so sorry to read about your dad's passing. May he rest in peace.
Mike Paniczko
April 20, 2020
Showing 1 - 8 of 8 results