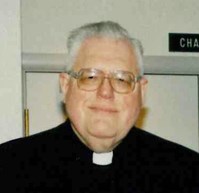 Springfield, MA — Rev. Robert W. Thrahser, age 89, passed away peacefully on September 1, 2021 at Holyoke Health Care. He was born on July 19, 1932 in Keene, NH. He received his Bachelor's degree from Williams College in 1954, his Master's degree from Brown University in 1956 then attended St. Philip Neri School from 1956-1957, during which time he also studied philosophy at Boston College. He attended St. John's Seminary in Brighton from 1957–1962 and was ordained to the priesthood on Jan. 27, 1962 at St. Michael's Cathedral and served his first mass at Holy Trinity Church in Greenfield. Father Thrasher served as an assistant pro-tern at St. Mary Parish in Orange from Feb to May of 1962 after which he served on the faculty at Cathedral High School teaching Physics for three years from 1962-1965, with residence at St. Thomas the Apostle Parish in West Springfield. He served as curate at the former St. Patrick Church in Chicopee from 1965-1970; at the former St Mary Church in Springfield from 1970-1974; pro-tern at Our Lady of the Valley Parish in Sheffield from June to Sept of 1974 and again from June to Aug of 1975. He was appointed as a notary in the Tribunal of the Springfield Diocese in 1973. Father Thrasher studied at the Catholic University of America in Washington, D.C. from 1974-1978 earning a canon law degree. He served as an assistant pastor at St. Michael's Cathedral from 1978-1979 and was pastor of St. Joseph Parish in Shelburne Falls from 1979-1982. Father Thrasher was appointed defender of the bond in 1979. Vice Chancellor of the Diocese by Bishop Maguire in 1981 with residence on Elliot Street from 1982-1989, Diocesan Consultor from 1982-1983 and again from 1984-1989 and Pro-Synodal judge from 1983-1993. He was a member of the first Presbyteral Council and served three, three-year terms from 1985-1994. Father Thrasher also served on the Financial Council from 1989-1992, was Judge of the Tribunal and Defender of the Bond to the Provincial Court, Springfield Division from 1990-1993 and Judge of the Tribunal and Defender of the Bond from 2005-2008. He also was on the St, Michael's Residence Board of Directors. He served as administrator of the former St. Bartholomew Parish in Bondsville from Aug to Oct of 1988; and as pastor of the former Holy Name Parish in Holyoke from 1995-2005. Father Thrasher retired on June 1, 2005 and served briefly as administrator pro-tern of Holy Cross Parish in Springfield, where he was in residence. He leaves two sisters, Ann Parenteau and Jeanine Key both of Keene, NH; his cousin, Marsha Bitner of Greenfield and nieces and nephews, Susan and Kenneth Cook, Robert Bitner and Bethany Bitner. He was predeceased by his grandmother, Susan Thrasher; father, William Thrahser, his aunt and uncle, Dorothy and Paul Bitner and cousin Paul Bitner Jr. Reverend Robert Thrasher will lie in state on Wed, Sept. 8, 2021 from 5 to 7 pm at Holy Cross Church 221 Plumtree Rd. Springfield with a Vesper service starting at 7 pm. Liturgy of Christian Burial will be celebrated by the Most Reverend William D. Byrne, Bishop of the Diocese of Springfield, on Thurs, Sept. 9, 2021 at 10:30 am at Holy Cross Church in Springfield. The rite of committal and burial will follow at Calvary Cemetery, 175 Wisdom Way, Greenfield, MA 01301. Donations may be made in Reverend Robert Thrasher's memory to Holy Cross Church 221 Plumtree Rd. Springfield, MA 01118.
Published by The Recorder on Sep. 6, 2021.
To plant trees in memory, please visit the Sympathy Store.
MEMORIAL EVENTS
Sep
8
Lying in State
5:00p.m. - 7:00p.m.
Holy Cross Church
221 Plumtree Rd., Springfield , MA
Sep
8
Service
7:00p.m.
Holy Cross Church
221 Plumtree Rd., Springfield , MA
Sep
9
Liturgy
10:30a.m.
Holy Cross Church
Springfield, MA
Funeral services provided by:
Sampson Chapel Of The Acres
MAKE A DONATION
MEMORIES & CONDOLENCES
0 Entries
Be the first to post a memory or condolences.