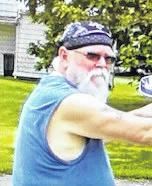 BRIAN KEITH HOWARD, age 62, of Jeffersonville, Ohio passed away on July 17, 2021 at The Ohio State University Wexner Medical Center after a two year battle with Cancer. He left this life surrounded by his loving wife, Rena and other close family members.

Keith was born on August 5, 1958 to Charles (Chuck) and Carolyn (Dean) Howard in Washington Court House, Ohio, where he spent his entire life and was a 1977 graduate of Washington Senior High School. During his youth, he enjoyed family trips to New York to visit extended family and spending time camping with his parents and three sisters at Armco Park and Black Lake, New York. He enjoyed playing youth sports such as little league baseball and football. He loved the outdoors and spent many days fishing and hunting with his Dad.

He married his wife Rena (Taylor) on December 12, 1981 and spent the next 39 years dedicated to her and building their life together. Rarely did you see one of them without the other. He worked for many years at Mac Tool, Steelox and Keihin Thermal Technology before his retirement in 2020. His love of the outdoors was evident throughout his life as he was a lifelong enthusiast of fishing, camping and taking a country cruise on his beloved Harley Davidson motorcycle. It should probably be mentioned that he was loyal fan of the Cleveland Browns, even through the hard years of few wins and many losses! He was the best uncle to his nieces and nephews, always there to take them on an adventure and left them with a lifetime of memories to cherish.

In keeping with Keith's wishes, a private graveside service will be held. The family will provide details for a Celebration of Life to be held at a later date.

"Death is not an ending, but a symbol of movement along the path upon which we are all traveling. As it may be painful to lose contact with the physical aspect of one we love, the Spirit can never be lost. We have been and always will be a part of each other" ~ John Denver

Arrangements have been entrusted to the Summers Funeral Home. Online condolences may be sent to www.summersfuneralhome.com

Published by Record Herald from Jul. 21 to Jul. 22, 2021.
To plant trees in memory, please visit our Sympathy Store.
MEMORIAL EVENTS
To offer your sympathy during this difficult time, you can now have memorial trees planted in a National Forest in memory of your loved one.
Funeral services provided by:
Summers Funeral Home
MAKE A DONATION
MEMORIES & CONDOLENCES
1 Entry
Thoughts and prayers, to the family.
Rebecca Stewart
July 24, 2021
Showing 1 - 1 of 1 results