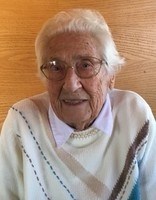 BORN
1922
DIED
2021
Helen Long
Stockton - Helen Long, 99, of Stockton, passed away on June 23, 2021. On May 18, 1922, Helen was born to George Nicholson and Rosina Fischl Nicholson near Santa Maria, California. She attended the one room school house just up the hill from their farm for grades 1 thru 8 where she excelled and frequently assisted the teacher by working with the younger children.
Helen graduated from Santa Maria High School and was the Valedictorian of her class. She entered the University of California, Berkeley, at age 16 and was awarded a teaching credential while earning highest academic honors and receiving a Phi Beta Kappa Key. At Berkeley she met her future husband, Broughton Long. They were married in 1944 while he was in the United States Army Air Force. She continued her teaching career until they decided to start their family. Philip, Eric, and Marjorie were born in 1949, 1951, and 1954 respectively. The family enjoyed camping, outdoor life in general, and coaching and then watching their children play baseball and basketball. While the children were in local schools, Helen was active in various PTA groups, church administrative positions, campfire girls as a leader, and a Pink Lady at Dameron Hospital for 30 years.
The Longs traveled extensively to all 50 states, many of them with their children, all of the Canadian provinces, as well as some 65 foreign countries. She was passionate about gardening and in her later years one could find her sitting in the shade of her persimmon tree, or tending to her roses, sawing limbs off of fruit trees, or generally tidying up plants big and small.
Survivors include her children, Philip Long, Eric Long, and Marjorie MacLeod (John); her sister- in-law, Margaret Enid Ahlstrom; nephews, Lee Ahlstrom, Woody Nicholson, and Mark Nicholson; niece, Terry Branas; grandchildren, Adam, Kevin, Monica, Evan and Helen; her great-grandchildren, Gianna, Maxine, Felix, Eli and Chase. She was preceded in death by her parents, her husband, Broughton, her brother, George Nicholson, and her grandchild Heather.
In lieu of flowers, the family requests any donations be made in honor of Helen Long to the Endowment Board for the benefit of retired Methodist Ministers, 1341 W. Robinhood Drive, Suite A, Stockton, California 95207-5515, or to a charity of your choice.
Published by The Record from Jul. 8 to Jul. 9, 2021.
To plant trees in memory, please visit the Sympathy Store.
MEMORIAL EVENTS
To offer your sympathy during this difficult time, you can now have memorial trees planted in a National Forest in memory of your loved one.
MAKE A DONATION
Please consider a donation as requested by the family.
MEMORIES & CONDOLENCES
0 Entries
Be the first to post a memory or condolences.