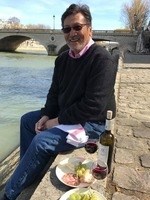 BORN
1940
DIED
2021
ABOUT
Edison High School
Morris Artiaga
Morris Artiaga passed away at home on June 2, 2021. Morris, the youngest of 5 children, was born December 10, 1940 in Guadalupe, CA to Lourdes Alcosiba and Mauricio Artiaga. Morris was predeceased by his parents, his brother Tony Artiaga, his sisters Saldonia Artiaga, Lily Carido, and Corrinne Fontanilla and his godson Christian Harrison. Morris is survived by his wife of 38 years, Cindy Clays, and his five children, Allison (Manuel) Rodriguez of Stockton, Traci (David) Pimentel of Arroyo Grande, Drew (Kelley) Artiaga of Tacoma Washington, Christian Artiaga of Arizona and Caitlin Artiaga of Long Beach. He was grandfather "Lolo" to Andrea Rodriguez, Allyson Presley, Dylan Pimentel, and Logan Artiaga. Morris was a great grandfather to Mikayla, Neeco, Bella, Alessia, Nevaeh and Mateo and a great great grandfather to Josiah. Morris' family moved to Stockton in the 1940's where he attended school and was in the first graduating class of Edison High School. Morris joined the Army in 1959 and served over three years stationed in New York and Hawaii. During that time, he married Eleanor Bague and together they had four children. After his military service, Morris attended the University of the Pacific, earning a Bachelor's degree and later received his Master's degree from UC Davis. In the mid 1970's he met Cindy Clays who he shared his life with for the next 45 years. Together they had a daughter. He began his life's work in community advocacy, teaching at the Stockton Adult School and later at San Joaquin Delta College. He established the Filipino Multi-Service Center which provided social services to the Filipino community. Morris was also a lobbyist in Sacramento for Asian Pacific Islanders ensuring representation and services and later managed the Filipino Plaza in Stockton coordinating services for the residents there. In his youth he worked in the fields and valued what he learned from the Filipino manongs he worked with. Morris was a man of many interests and talents. In high school he played basketball for Edison and for the Fil-Am league. During the 1970's through the early 2000's Morris could be found at Oak Park with a tennis racket in hand ready to play singles, doubles or mixed doubles. Rarely did a tournament happen without his entry in all three categories. He was a sought-after partner for both men's and mixed doubles. In 2004 he retired his tennis racket and took on the game of golf and played with the same gusto and skill he played tennis. He was a natural athlete. He could be found at Micke Grove golf course during the week picking up a foursome and meeting new people. He loved music, especially jazz, and shared that love with his family. He was a skilled card player, a voracious reader of spy novels, a practical jokester, a much-loved pizza maker, and a Formula One fan. Morris and his wife Cindy traveled the world and shared their travels with family and friends. Paris was their go-to destination where they introduced friends and family to the City of Lights over the years. Paris was their home base when traveling throughout Europe and together they visited the city ten times. Morris' superpower was his ability to encourage people to take the risk, to get out of their comfort zone, to travel, to buy the car, to be a life-long learner, to do what you didn't think you could do. Morris was an unforgettable character and will be missed by all who knew and loved him. His wit, his hugs, and his laughter will linger in our loving memories of him. A Celebration of Life is planned for Sunday, July 25, 2021 at the Elkhorn Country Club in Stockton from 1:30 to 5:30 pm.
Published by The Record from Jul. 2 to Jul. 4, 2021.
To plant trees in memory, please visit the Sympathy Store.
MEMORIAL EVENTS
Jul
25
Celebration of Life
1:30p.m. - 5:30p.m.
Elkhorn Country Club
Stockton, CA
MAKE A DONATION
MEMORIES & CONDOLENCES
1 Entry
Hello Cindy, I´m so sorry for your loss. In reading the obituary, Morris had quite a life. It was very apparent how dedicated you were to each other. It is so hard losing your spouse, and my sincere thoughts are with you and Caitlin. Love, Katherine.
Katherine Boykin
July 22, 2021
Showing 1 - 1 of 1 results