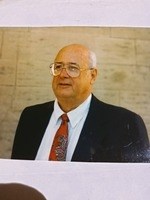 BORN
1931
DIED
2020
FUNERAL HOME
Covell Funeral Home
232 East State Street
Traverse City, MI
john warren patterson
frankfort, michigan
February 16, 1931 - December 25, 2020
John Warren Patterson, age 89, passed away suddenly on December 25th, 2020 at home. John was born on February 16th, 1931 in East Orange, New Jersey. Soon after, he moved with his family back to their hometown of Webster Groves, Missouri where he enrolled after graduation at Westminster College in Fulton, Missouri and medaled in intramural swimmimng. He enlisted in the U.S. Navy and served as a radar operator during the Korean War, and after his discharge, he attended Washington University in St. Louis. He earned his degree in Chemical Engineering, followed later by an M.B.A. from Fairleigh Dickinson University in New Jersey in 1980. While at Wash U, John met Margaret Ellen Christensen (Chris). After graduation, on December 1st of 1956, they wed, and were happily married for 64 years. The twins were born in LaGrange Park, Illinois in 1963 and John always participated with them in their chosen activities while growing up in Westfield, New Jersey. He coached Bruce's winning Little League baseball team and was a Football Booster and watched Marcy win ribbons at weekend horse shows. The family went on frequent field trips to historic east coast sites and museums. John is survived by his wife Chris and beloved twins; Bruce Kendrick Patterson, M.D. (Carol) and Marcy Lucas Patterson-Grudzien (Stewart) and beloved granddaughter Penelope Penfold Patterson, sister-in-law Dr. Mary Christensen, sister-in-law Marlene Patterson and her children, John's nieces and nephews, Kim, Russell, Kelly and Krista and their darling families. He is preceeded in death by his brother Bob and parents Lucy and Robert. Every summer, John's family would return to their 6th generation Crystal Lake family cottages adjoining the Congregational Summer Assembly. John's great grandmother would come from Chicago on the ship "Puritan", back when some C.S.A. members would live in tents. John's family moved permanently to the cottage from New Jersey in 1983 and he immediately became active in the community as a member of the Friendly Frankfort Rotary Club (he and Chris are both Paul Harris Fellows), C.L.Township Board of Review, POMH Volunteers, and the Chamber of Commerce, where he organized the Collector Car Show. His two main hobbies were his 1948 MG-TC British sports car (many 4th of July parades !) and from his college days on, was a member of the Crystal Lake Yacht Club where he sailed and raced wooden C Scows and E Scows. He also enjoyed golf and tennis and loved cats and birds. John was "everyboy's biggest fan"...A memorial service will be held late summer at CLYC to celebrate his love of boats and sports cars and Crystal Lake. Contributions in John's name may be made to the CLYC Sailing School (P.O. Box 262) or to the Animal Welfare League of Benzie County (P.O. Box 172) both in Frankfort. Chris of Covell Funeral Home of Traverse City was in charge of arrangements, and was so helpful on Christmas night.
Published by Benzie County Record Patriot on Aug. 23, 2021.
To plant trees in memory, please visit the Sympathy Store.
MEMORIAL EVENTS
To offer your sympathy during this difficult time, you can now have memorial trees planted in a National Forest in memory of your loved one.
Funeral services provided by:
Covell Funeral Home
MAKE A DONATION
MEMORIES & CONDOLENCES
0 Entries
Be the first to post a memory or condolences.