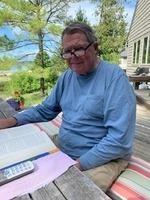 BORN
1935
DIED
2021
FUNERAL HOME
Jowett Family Funeral Home
7223 South Street
Benzonia, MI
Ronald J. Nugent
August 20, 2021
Ronald J. Nugent, a resident of Frankfort, MI, died August 20, 2021. Ronald James Nugent was born in Frankfort, MI on April 12, 1935, to Esther and David Nugent. He was the oldest of three children who remained close with his parents, sisters and extended Nugent family throughout the years. In school he excelled academically and, on the sports fields, playing both football and basketball for the Frankfort Panthers. After graduation, he attended Michigan State University where he studied chemical engineering and graduated with honors in 1957. While at MSU he was a member of the Alpha Chi Sigma fraternity. He later went on to receive his Master of Business Administration from Western Michigan University in 1971 and a liberal arts course of study from Wabash College. Ron also served as a Second Lieutenant in the Army ROTC from 1957 to 1965.
On September 18, 1955, Ron married Ruth J. Hatheway, his high school sweetheart, and together they created a life and homes in several states while raising their three daughters. Starting out as a chemical engineer, Ron's career took him to jobs in New York, Ohio, Illinois, Michigan, and Kansas with ever increasing roles in management. Ron retired in 1990 from his position as President of American Salt Company based in Kansas City and returned to his hometown of Frankfort. He and Ruth split their time between Frankfort and Perdido, Key, FL. Ron was active with many professional and community organizations throughout his life. He was a member of the Free Masons, the Salt Institute, and the Rotary Club, serving on various committees and club functions. Ron had a beautiful voice and sang with the Methodist Church choir. He was passionate about golf, as a player, spectator, and course ranger. In addition, he was an avid reader and could be found more recently with a book in his lap and a golf tournament playing in the background. Ron and Ruth were involved with the creation of the Betsie Valley Trail, as well as various land conservancy projects in the Benzie County Area, most notably on Upper Herring Lake. Ron and Ruth remained lifelong supporters of Michigan State university, both academics and athletics, and never missed a game in person or otherwise. Sparty On!
While Ruth was the more social of the duo, Ron cultivated a diverse group of friends over the years, remaining in contact with many. Ron was equally committed to family and enjoyed the boisterous gatherings that he and Ruth orchestrated for both family and friends. Ron was a loving, kind, and generous and will be remembered fondly by family and friends. Ron was preceded in death by his wife, Ruth, and is survived by his sister, Elaine Peterson, his daughters Sandra Nugent (Robert Ball), Brenda Ott (Rick) and Rhonda Nugent; and seven grandchildren Sam, Jacob, Isaac, Arden, Nicholas, Katy, and Nolan.
Memorial gifts may be given to the Frankfort United Methodist Church, 537 Crystal Avenue PO BOX 1010, Frankfort MI 49635; Friends of the Betsie Valley Trail, PO BOX 474, Beulah, MI 49617; Michigan State University, University Advancement Spartan Way, 535 Chestnut Rd, Room 300, East Lansing, MI 48824. A celebration of Life will be held on Saturday, September 18 at 11:00am at the Frankfort United Methodist Church, 537 Crystal Ave, Frankfort, MI. Arrangements by the Jowett Family Funeral Home, Benzonia.
Published by Benzie County Record Patriot on Sep. 13, 2021.
To plant trees in memory, please visit the Sympathy Store.
MEMORIAL EVENTS
Sep
18
Celebration of Life
11:00a.m.
Frankfort United Methodist Church
537 Crystal Ave, Frankfort, MI
Funeral services provided by:
Jowett Family Funeral Home
MAKE A DONATION
MEMORIES & CONDOLENCES
0 Entries
Be the first to post a memory or condolences.