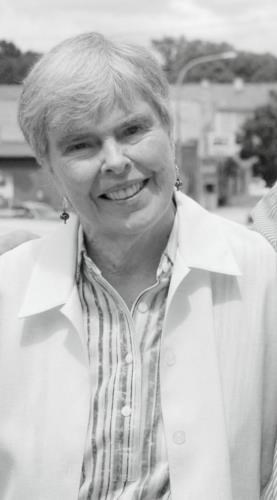 She was born on March 19, 1929, in Detroit, daughter of John Frederick Reeder and Ruth Adams Reeder. She spent her childhood years in Birmingham, Michigan, Palm Springs, California, and New York, where she attended the Emma Willard School.

A good student and talented athlete, she spent her youth training as a competitive swimmer and riding horses whenever she could. She had a bit of a devilish side, skipping class so often in high school to hitchhike to the stables to go riding with a friend, that they managed to set a new school record for unexcused absences.

While attending boarding school, she spent a trans-formative year living with a family that bore a famous political name and tradition. There she was introduced to personal freedom, civil rights and social justice; crossing paths with political activists such as Eleanor Roosevelt, Henry Wallace, Hazel Scott and Mrs. Paul Robeson. She remained committed and passionate to those beliefs her entire life.

Following high school, Susan attended Northwestern University to study journalism. Two years later, she left school to marry a fellow student and WWII veteran, Adam Arthur Breuer. They were married for two decades before divorcing in 1978. They lived in various Chicago suburbs and raised three children, each of whom she is, with good reason, immensely proud. During that time she served in leadership positions of many social organizations.

Susan continued her education at Northwestern, achieving her doctorate in 1975. She moved to Chicago and her career included serving as Director of Education and the Psychology Internship program at Illinois Masonic Medical Center, as adjunct professor at her alma mater Northwestern University, and at the Abraham Lincoln School of Medicine at the University of Illinois.

While attending her 40th class reunion in Birmingham, Michigan, Susan reconnected with her sixth grade schoolmate, Nancy Kasperzak, who would become her long-time beloved partner. Soon after their reconnection, Susan moved to Frankfort, Michigan, and opened her private practice in Traverse City and then in Benzonia, where she lived the rest of her life. Together, she and Nancy traveled around the world, rode their horses, shared literature, the opera, Shakespeare performances, enjoyed dinner gatherings with friends, and worked on many social issues.

Susan was known for her quest for knowledge and her unwavering commitment to fill her life with the experiences she loved; films, music, art, golf, bird watching and discussions. She read the newspaper and listened to political reports every day. She had a way of charming everyone she came in contact with. She was genuinely interested in the lives of people she met, and many can tell stories of the ways her encouragement and support helped them follow their hearts.

Among many other causes, she was active in the Benzie Democrats, League of Women Voters, a board member of the Friends of the Darcy Library and the BASO Symphony. She sang in the Community Chorus, the Singing Sisters and enjoyed gathering on Sunday mornings with C3. She loved her community, her family, her dear friends and visiting the shores of Lake Michigan.

She was preceded in death by her brother, John Frederick Reeder Jr.; and sister, Robin Reeder Valentine.

A Celebration of Life will be held in late spring, details forthcoming. In lieu of flowers, contributions can be made to Grand Traverse Regional Land Conservancy, Michigan Citizens for Water Conservation, Friends of Point Betsie Lighthouse, or Barnswallow: A Wild Bird Concern.

Published by Benzie County Record Patriot on Mar. 18, 2020.
To plant trees in memory, please visit the Sympathy Store.
MEMORIAL EVENTS
To offer your sympathy during this difficult time, you can now have memorial trees planted in a National Forest in memory of your loved one.
MAKE A DONATION
MEMORIES & CONDOLENCES
0 Entries
Be the first to post a memory or condolences.