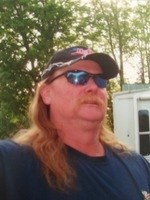 BORN
1963
DIED
2021
Willard John Cox
Chatham, MI
May 13, 1963 - July 30, 2021
Willard (Will) John Cox, 58, passed away on Friday, July 30, 2021, after a long battle with liver failure. Will was born on May 13, 1963, in Frankfort, Michigan to Willard Russell Cox and Rosemary Ruth spafford (Cox). Will eventually would move to Chatham, Michigan in the Upper Peninsula with his parents at the age of six. Will was a graduate of Eben High School, in Eben Jct., Michigan. Will spent many years alongside his father as a logger while living in the U.P. and several years as a Wateblaster during his years living in Wisconsin. His years as a Waterblaster was filled with many opportunities to travel throughout the U.S. but his love for the U.P. eventually brought him back.
Will was an avid outdoorsman! He absolutely loved being outside! If he wasn't hunting, fishing, or gardening, you probably would have found him just taking walks outside or sitting by a firepit with his dog, Larz. Will also enjoyed playing pool and spent over 20 years playing in tournaments and leagues with friends, colleagues and at times with his younger two brothers.
Many who know Will well, knew his larger-than-life personality! In fact, many called him by his nickname "Viking". The only thing that probably would have matched his loud infectious laughter would have been his snoring! but his pride and joy were his three children! Within minutes of talking to Will, whether it be in person or by phone, he would be bragging about his children and grandchildren. His favorite days were spent surrounded by any one of them at the family's camp, grilling out building a camp fire and keeping a look out for deer!
Will is survived by his son, Jason (Janelle) Cox, his daughter, Lisa (Ronnie) Hutchinson, his son, Mike (Juli) Ryan (Cox) and grandchildren, Riley, Cameron, Ryder, Theodore and Elouise. Will is also survived by his mother, Rosemary (Dave) Spafford, brother Tim (Elizabeth) Cox, sister Daronda (Dale) Knighton, brother, Tommy (Michelle) Cox, and several cherished Aunts, cousins, nieces and nephews.
Predeceased by his father Willard R. Cox, Dec. 2015; and grandparents, Jesse and Vera Pace and Ernest C. Cox and Hershel (Pud) and Marvel Holmes.
Will's family would also like to say a special thank you to a close friend of Will's, Becky Coakley, and all the doctors and nurses at the Henry Ford Center for taking such great care of Will! The care and love you all have shown this past year has been truly appreciated and will not be forgotten!
Will's Celebration of Life will be held on Sunday, August 29th from 1-6pm at the American Legion in Marquestte. We are looking forward to seeing everyone who loved Will and share all of our memories and stories together.
Published by Benzie County Record Patriot on Aug. 23, 2021.
To plant trees in memory, please visit the Sympathy Store.
MEMORIAL EVENTS
Aug
29
Celebration of Life
1:00p.m. - 6:00p.m.
Marquette American Legion Post 44
700 W Bluff St., Marquette, MI
MAKE A DONATION
MEMORIES & CONDOLENCES
0 Entries
Be the first to post a memory or condolences.