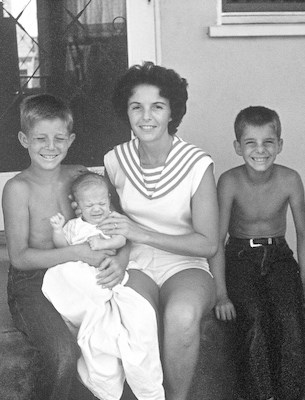 Doris Louise Callan passed away peacefully on April 17, 2021, one month before her 93rd birthday. The daughter of Joseph and Bertha Kenyon and the youngest of eight children—Lloyd, Doc, Luella, Ralph, Vern, Dorothy, Melvin, and Doris—she grew up in San Diego, California. Doris graduated from Hoover High School, where she excelled in gymnastics and was a member of the school tumbling team.

Soon after graduation, Doris met and married her husband of 71 years, Wallace J. Callan. Wally became a San Diego fireman after serving in the navy during World War II. The happy couple bought a house in the Clairemont section of San Diego, where they provided a loving home for their three sons—Steven, Kenneth, and Matthew.

Every morning, Mom would get us out of bed, make us a hearty breakfast, comb our hair, hand us our Roy Rogers lunch boxes, and send us off to school in the shirts she'd made. Her sewing machine was often set up on the kitchen table, surrounded by paper patterns for her latest project.

Wally became a California Fish and Game warden in 1958, assigned to the patrol boat Marlin, out of Seal Beach. The family moved to the Los Angeles area, where we lived until 1960, when Doris and Wally made the wise decision to raise their boys in a small town. Wally transferred north to the marvelous little farm town of Orland, where we set down our roots and remained for the next ten years.

"Those were the happiest years of my life," Doris would say many times over the next five decades, "watching you boys grow up, going to your ball games, and getting to know so many wonderful people."

Doris flourished in Orland. She made lifelong friends, joined the Junior Women's Club, and later became a proud and active member of the Lambda Iota chapter of Beta Sigma Phi sorority. In addition to running a household, cooking gourmet dinners every night, and getting her boys off to school, Doris worked at a butcher shop in town and served as secretary to the Orland High School principal. A natural athlete, she played golf, excelled at tennis, and consistently bowled over 200 at the Orland Bowl.

Moving was a constant in Doris's life, and she loved it. Wally's promotions between 1971 and 1982 required moves to the North Coast, San Francisco Bay Area, and Southern California. During that time, Doris worked for several physicians. She and Wally would often go on long-distance bike rides to the ocean while living in Southern California.

After Wally's retirement in 1982, he and Doris moved back to Northern California, where their three sons had grown up and pursued careers of their own. Living their retirement years in Chico and Redding, Doris and Wally golfed, played tennis, rode bicycles, and traveled the world until Wally was diagnosed with Alzheimer's in 2012 and passed away in 2018. Doris would spend the remaining years of her life living happily at The Vistas Assisted Living Community in Redding, where she developed many deep friendships among both residents and staff.

Doris will be deeply missed by her family and many friends. If you would like to honor her memory, we suggest a donation to Alzheimer's Disease Research. Thank you.


To plant trees in memory, please visit our Sympathy Store.
Published by Redding Record Searchlight on Apr. 25, 2021.
MEMORIAL EVENTS
No memorial events are currently scheduled.
To offer your sympathy during this difficult time, you can now have memorial trees planted in a National Forest in memory of your loved one.
MEMORIES & CONDOLENCES
4 Entries
Doris came to our home often on Saturday mornings to have coffee with my mom. My parents remained friends with the Callens throughout all of their moves. Doris was always full of life and gracious.
Lynda Thralls
Friend
April 26, 2021
Steve, Kathy, and Matt, I am so sad to hear of Doris’s passing! I pray that all of your wonderful memories will bring you all peace during this difficult time. Remember that all of you will carry her in your heart, so she will always be with you! She was an amazing person and Mother! Love from Lorraine Congdon!
Lorraine Congdon
Family
April 25, 2021
A life well lived! Her legacy is the wonderful family she raised and she will be remembered through them.
Mark and Jeanette Fairlee
Friend
April 25, 2021
She lived a long & happy life. Well lived, Doris, well loved!
Friend of Steven & Kathy
Kit
Friend
April 25, 2021