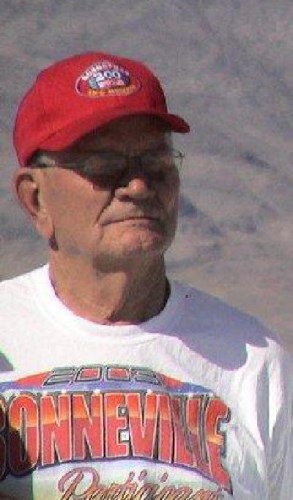 Thomas Elmer Bryant Jr was born February 28, 1930 in Pettigrew, Arkansas. He passed from this world June 9, 2015, in Redding, California. He was preceded in death by his son, Barry, and his wife, Margaret. They were married for 62 years. In 1952 they moved to La Habra, California, where they had four children, Jeff, Dan, Sandy and Barry.

Tom and Margaret opened Bryant Automotive in Redding on May 15, 1968. The family business continues operating today. It was while living in Southern California that his love for all things speed really developed. He was a long time participant in land speed racing both at El Mirage, in the Mojave Desert of California, and at the Bonneville Salt Flats in Utah. He entered the Bonneville 200 MPH Club in 1990 at 217.236 mph driving the Pierson Coupe. Since 1999, with Toms race car, six more family members were inducted into the 200 MPH Club, his three sons, Jeff, Dan and Barry, his brother Gary, grandson Tim and nephew Ken Smith, the last in 2004 at 244.260 mph.

Tom was an Arbitrator, Church leader, active member of East Redding Rotary, ASC (Automotive Service Council) & BNI (Business Networking International). He was an avid reader, racing historian and Facebook blogger. He was a Scoutmaster, enjoyed backpacking and was a dedicated family man.

A celebration of life, for Tom Bryant, will be held on June 20th at 2pm. Location: Redding Christian Fellowship...2157 Victor Ave Redding CA 96002.

Donations can be made to "Save The Salt"

www.savethesalt.org/
Published by Redding Record Searchlight on Jun. 16, 2015.
To plant trees in memory, please visit the Sympathy Store.
MEMORIAL EVENTS
To offer your sympathy during this difficult time, you can now have memorial trees planted in a National Forest in memory of your loved one.
Funeral services provided by:
Lawncrest Chapel
MAKE A DONATION
MEMORIES & CONDOLENCES
3 Entries
We feel so blessed to have gotten to know Tom .
He and Margaret were able to stay with us several years on various trips and we loved every minute we spent with them. He is a very special man in our hearts and will never be forgotten. We respect him, love him and will miss him.
Craig & Connie Mincer
June 17, 2015
Tom will always be remembered for being a great Christian leader and friend. He will forever be in our hearts. May God comfort Tom's family during this time.
Alisa Miller
June 17, 2015
My heart felt condolences to Toms family and friends. He was a great man and his absence here will be felt by many but I know that his reunion with his family in Heaven is sweeter than words can express.
Jo (Lane) Crossland
June 17, 2015
Showing 1 - 3 of 3 results