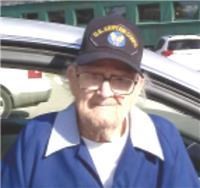 BORN
1918
DIED
2022
FUNERAL HOME
Lensing Funeral & Cremation Service - Iowa City
605 Kirkwood Avenue
Iowa City, IA
Darrel Henry Cary, 103, Coralville, passed away at his home on Jan. 10, 2022.
Darrel was born Mar. 26, 1918, in Pawnee City Neb, He graduated from Pawnee City, Neb., High School in 1936 and proudly served his country in the U.S. Army Air Force during World War II, achieving the rank of Staff Sargent. He was assigned to the 1050th Army Air Force Base Unit, Fort Douglas, Utah. Darrel was qualified as a Sharpshooter on the Carbine Pistol. Darrel earned the American Theater of Operations Service Ribbon, Good Conduct Medal, and the AR 600-68 Victory Medal. He served from April 23, 1942 through Dec. 7, 1945 and was discharged honorably from the Army Separation Center Fort Douglas, Utah.
Darrel was a member of the Red Oak American Legion. He married Ruth W. Smith in 1947, in Red Oak.
Darrel worked for the Omaha Bakery Delivery, Dodge Dealership Red Oak, Cary Radiator Service, Red Oak Marine, 218 Marina North Liberty and Cary Marine Service Iowa City.
Darrel and Ruth were avid Hawkeyes fans and went to many of the sporting events in Iowa City and bowl games. Darrel was also an avid fisherman and loved going to Oregon to fish with his cousin, going to Florida to fish with Steven, going to Colorado to fish with his grandson Brian, traveling to California to visit his grandson Don and traveling to Kansas to visit his granddaughter, Jill. He also spent time with his grandsons in Cedar Falls. Darrel and Ruth were members of the First Christian Church. Phil and Brad were caregivers who spent many years caring for Darrel.
Darrel is survived by his sons, Rodney of Cedar Falls, Philip of Coralville and Steven of Florida; grandchildren, Don, Brian, Tim, Chris, Nick, Brad, Jill, Robert; and eight great-grandchildren.
There will be no services for Darrel. The body will be cremated by Lensing Funeral and Cremation Service of Iowa City, and inurnment will be at the Omaha National Military Cemetery.
Published by The Red Oak Express from Jan. 17 to Jan. 25, 2022.
To plant trees in memory, please visit the Sympathy Store.
MEMORIAL EVENTS
To offer your sympathy during this difficult time, you can now have memorial trees planted in a National Forest in memory of your loved one.
Funeral services provided by:
Lensing Funeral & Cremation Service - Iowa City
MAKE A DONATION
MEMORIES & CONDOLENCES
0 Entries
Be the first to post a memory or condolences.