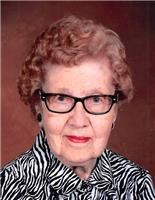 BORN
1926
DIED
2022
FUNERAL HOME
SELLERGREN LINDELL DEMARCE FUNERAL HOME - Red Oak
509 6TH STREET
Red Oak, IA
Enola Peterson, 95, Stanton, passed away Monday, Jan. 10, 2022, at Accura Healthcare of Stanton, Stanton.
Enola Peterson, the daughter of Levi and Minnie (Newman) Sandell, was born Sept. 4, 1926, in Stanton. Enola was raised in Stanton and in 1943, graduated from Stanton High School.
On Aug. 27, 1947, Enola was united in marriage to Donald L. Peterson at the Little Brown Church, Nashua. They made their home on their farm southwest of Stanton. Enola enjoyed growing a large garden for canning for her family, along with raising chickens. In 1978, she and Donald moved into Red Oak.
Enola was an active member of Mamrelund Lutheran Church. She sang in the choir and was a part of WELCA, having served as president and a group leader. She was also a Christian Action leader for 17 years. In 1987, Enola began sewing and quilting with the church ladies. She helped make many quilts and valued the time with the ladies. Enola enjoyed reading and playing pitch at the Stanton Senior Center. She was involved in the Ernie Johnson Post #406 American Legion Auxiliary, having served as president and secretary, and in 1983, was named Farm Bureau Homemaker of the Year. Other organizations Enola was a member and supporter of was the Red Oak Monday Club, Friendly Study Club and Blade Friendship Club.
Enola often helped each one of her children with day-to-day needs. She loved mending clothing, helping prepare homes for graduations, and especially, dropping off something she had made to eat. She was the "Mom" who would do a favor and help all she could. Enola looked forward to attending her grandchildren's many activities. She also loved spending time together with family over dinners and coffees.
Enola was preceded in death by her parents; husband, Donald L. Peterson on Nov. 30, 1995; daughter, Candace Gotschall; brother, Elman Sandell; and son-in-law, Larry Mundorf.
Enola is survived by three children, Linda Mundorf of Griswold, Denise (Knute) Hallquist of Stanton, and Curtis Peterson of Stanton; six grandchildren, Lori (John) Watson of Griswold; Matthew (Kate) Gotschall of Cave Creek, Ariz.; Mitchell (Carrie) Gotschall of Oakdale, Minn.; Allison (Andrew) Newman of Urbandale; Valerie (Zach) Hensley of Bellevue, Wash.; and Carrie (Josh) Moline of Elkhorn, Neb.; 13 great-grandchildren; four great-great-grandsons; and son-in-law, Richard Gotschall of Council Bluffs; other relatives and many friends.May God bless her memory and give strength to those who mourn.
Funeral Service was held Monday, Jan. 17, 2022, at Mamrelund Lutheran Church, Stanton. Burial was in Mamre Cemetery, Stanton.
Memorials may be made to the Mamrelund Lutheran Church Endowment Fund. Remembrances and condolences may be shared with the family at sldfuneralhome.com.
Sellergren-Lindell-DeMarce Funeral Home is in charge of Enola's arrangements.
Published by The Red Oak Express from Jan. 17 to Jan. 25, 2022.
To plant trees in memory, please visit the Sympathy Store.
MEMORIAL EVENTS
To offer your sympathy during this difficult time, you can now have memorial trees planted in a National Forest in memory of your loved one.
Funeral services provided by:
SELLERGREN LINDELL DEMARCE FUNERAL HOME - Red Oak
MAKE A DONATION
MEMORIES & CONDOLENCES
0 Entries
Be the first to post a memory or condolences.