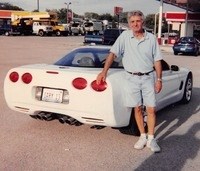 BORN
1945
DIED
2021
FUNERAL HOME
McGuire & Davies Funeral Home and Crematory - Monmouth
1007 N G St
Monmouth, IL
Gary R. Trotter
Monmouth - Gary R. Trotter, 76, of Monmouth, Il passed away at 11:59 am, Monday, August 16, 2021 at his home. Gary was born February 2, 1945 in Peoria, IL the son of Clarence and Mary Virginia (McConnell) Trotter. He graduated from Galesburg High School in 1963 and was inducted into the Galesburg High School Athletic Hall of Fame in 1989. Gary served with the United States Army from 1965 to 1971. Gary married Sandra S. Monzo on September 3, 1968 in Galesburg, Il and she died February 24, 2003. Gary worked as the Golf Pro at Monmouth Country Club for over 25 years. He later worked as the receiving clerk at County Market in Monmouth until recently. He was a car enthusiast and loved his Corvettes. Gary always greeted you with a smile and a "How are you doing?" He was preceded in death by his parents, wife and sister, Beverly Woods. Graveside services with Military Honors will be at 11:00 am Friday, August 20, 2021 at East Linwood Cemetery, Galesburg, IL. Memorials may be given to Western Illinois Animal Rescue. McGuire & Davies Funeral Home and Crematory, Monmouth is in charge of the arrangements.