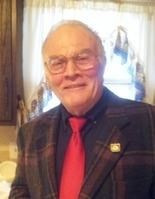 FUNERAL HOME
Hurd-Hendricks Funeral Homes - Knoxville
120 South Public Square
Knoxville, IL
Gerard A. "Gerry" Walsh
Galesburg - Gerard A. "Gerry" Walsh, 78, of Dahinda, passed away on Friday, August 27, 2021, 4:40 AM at OSF St. Mary Medical Center, Galesburg.
Gerry was born on September 4, 1942 in Chicago, Illinois. He was the son of Elizabeth Walsh. Gerry is survived by the love of his life, Susie Chandler, they had twenty-three years together; a daughter, Betty (Tony) Richards of Elwood; five grandchildren, Michael, Ashley, Amber, Maranda and Aimee; and three great-grandchildren, Arianna, Peyton and Addison. He was preceded in death by his mother, Elizabeth.
Gerry was a veteran of the United States Army. He served during the Vietnam War. Gerry also completed four years at Carl Sandburg College, studying everything from literature to automotive. He was a carpenter by trade, but a "Jack of All Trades" in reality. He could fix almost anything. Gerry was a member of The Oaks Community Church. He loved to sing and dance, and take care of the wildlife out at his home. Gerry was a very humble person and had a personality bigger than life. He never knew a stranger. Those who were blessed to know him will miss him and his conversations dearly.
Cremation rites have been accorded. A Celebration of Life will be held from 2-5 PM at Harley's Pub, 2243 Grand Ave, Galesburg on Saturday, September 11, 2021. Hurd-Hendricks Funeral Homes and Crematory, Knoxville have been entrusted with arrangements. Expressions of sympathy may be left to the family at www.hurd-hendricksfuneralhome.com.
Published by The Register-Mail from Aug. 30 to Aug. 31, 2021.
To plant trees in memory, please visit the Sympathy Store.
MEMORIAL EVENTS
To offer your sympathy during this difficult time, you can now have memorial trees planted in a National Forest in memory of your loved one.
Funeral services provided by:
Hurd-Hendricks Funeral Homes - Knoxville
MAKE A DONATION
MEMORIES & CONDOLENCES
Sponsored by Hurd-Hendricks Funeral Homes - Knoxville.
1 Entry
Sending all of our love to "Uncle" Gerry's family. We have many memories of him spending time at the house, always fixing something for us, and making us laugh along the way. Our deepest condolences
Drew and Veronica Wolfgram (Hilgenberg)
September 6, 2021
Showing 1 - 1 of 1 results