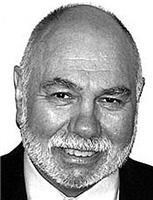 BORN
1943
DIED
2018
FUNERAL HOME
Watson-Thomas Funeral Home
1849 N Seminary St
Galesburg, IL
GALESBURG - Deacon Michael B. Mannino, 74, Galesburg, passed away peacefully on Tuesday, Jan. 16, 2018, at his home with his family by his side.
Deacon Mike was born April 7, 1943, in Chicago, the son of Carl and Nancy Ann (Ruvolo) Mannino. Mike married the love of his life, Mary C. "Molly" Martin on Nov. 4, 1967, at St. John of the Cross Catholic Church in Western Springs. This fall they celebrated their 50th anniversary.
He is survived by his wife, Molly of Galesburg; his mother, Nancy Mannino of Phoenix; one son, Michael J. Mannino of Galesburg; two daughters, Maripat Brown of Marlborough, Massachusetts and Ann Mannino of Wakefield, Massachusetts; and two grandchildren, Liam and Alex Brown. He is also survived by one sister, Carole (Scot) Stapleton of Phoenix, Arizona; and two brothers, Carl (Ollie) Mannino of Colorado Springs, Colorado and Tony Mannino. Mike was preceded in death by his father.
Mike earned his BA and MA from Northern Illinois University and his juris doctor from John Marshall Law School. After graduating from Northern, he taught junior high school in Villa Park, earning the name "The Sunshine Man" from his students and colleagues for his sunny disposition, and for a role playing government game he used as a teaching tool. For four years he taught full time and went to night law school. Upon graduating from law school, he clerked for Iowa Supreme Court Justice M.L. "Larry" Mason. He considered the judge to be his legal and professional mentor. In 1978 he became executive director of West Central Illinois Legal Assistance, where he served for 21 years. He was awarded the Esther R. Rothstein Award in 2001 in recognition of his distinguished career as an attorney and as a champion of equal access to justice. He was in private practice from 2001 to 2013.
He was an active member at Immaculate Heart of Mary Church. Mike was ordained a permanent deacon in the Catholic Church on May 19, 2007 and has served as a deacon at IHM for the past 10 years. He was an active member of the Northwest Area Cursillo from 1983 and served as its assistant spiritual director from 2007 to 2017. Mike was a past member of the Galesburg Noon Lion's Club, United Way, and a 4th degree member of the Knights of Columbus. Mike was an avid fisherman with a great sense of humor and a gentle spirit.
The rosary will be prayed at 4 p.m. Thursday, Jan. 18, 2018, at Watson-Thomas Funeral Home with visitation following from 5 to 8 p.m. Mass of Christian Burial will be at 10:30 a.m. Friday at Immaculate Heart of Mary Catholic Church. Rev. Msgr. Ernest Pizzamiglio will officiate. Burial will follow in St. Joseph's Cemetery. Memorials may be directed to the Northwest Area Cursillo or Immaculate Heart of Mary Parish. Online expressions of sympathy may be sent to the family at www.watsonthomas.com.
Published by The Register-Mail on Jan. 18, 2018.
To plant trees in memory, please visit the Sympathy Store.
MEMORIAL EVENTS
Jan
18
Rosary
4:00p.m.
Watson-Thomas Funeral Home
1849 N Seminary St, Galesburg, IL
Jan
18
Visitation
5:00p.m. - 8:00p.m.
Watson-Thomas Funeral Home
1849 N Seminary St, Galesburg, IL
Jan
19
Mass of Christian Burial
10:30a.m.
Immaculate Heart of Mary Catholic Church
IL
Jan
19
Burial
St. Joseph's Cemetery
IL
Funeral services provided by:
Watson-Thomas Funeral Home
MAKE A DONATION
MEMORIES & CONDOLENCES
Sponsored by Watson-Thomas Funeral Home.
4 Entries
Dear Molly, Mike, Maripat and Ann, we were so sorry to learn of your dear husband and dad's going home to God. Not sorry for him, but knowing of your loss, we are sorry for you. What a wonderful resume of his life and work in the paper. He was always kind of quiet in the old days at Costa, but what a wonderful Catholic presence he was in becoming a Deacon!
Please know of our sympathy and prayers for you at this time and always.
With love and prayers,
Sister Lucy and Sister Mary
S.Lucy and S. Mary
January 27, 2018
Dear Molly, Michael, Maripat and Anne,
Mike was such a great guy and I know you will miss him terribly, even as you cherish your memories of him and laugh as you share stories of him. I liked and admired him so much!
Please add mine to all the prayers and thoughts you and Mike are receiving.
All my best, Mel Arney
Melissa Arney
January 19, 2018
Molly and family,
Mike was such a joy to get to know and such a wonderful asset to our parish. We will miss him and his smile!! Our deepest sympathy to you family.

John and Lynn Fields
January 18, 2018
Dear Molly and family,
I'm very sorry to hear of your loss. I recall seeing Mike around town and he almost always had a smile on his face. I wish you peace and good memories.
Cathy Walters
January 18, 2018
Showing 1 - 4 of 4 results