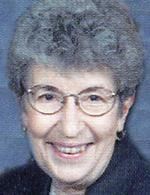 BORN
1929
DIED
2015
FUNERAL HOME
Watson-Thomas Funeral Home
1849 N Seminary St
Galesburg, IL
FLOWER MOUND, Texas - Verna Jean Lohmar, 86, Flower Mound, formerly of Galesburg, Illinois, died at 6:40 p.m. Thursday, May 21, 2015, at Baylor Regional Medical Center, Grapevine.
Jean was born Jan. 20, 1929, in Edwardsville, Illinois, the daughter of John Cyril and Edith Sarah Landolt Drda. She married Donald R. Lohmar on June 4, 1952, in Corpus Christi Catholic Church, Galesburg. He preceded her in death on Dec. 7, 2012.
Jean is survived by three sons, John of Rhome, Mark (Carol) of Keller, and Daniel (Julie) of Springfield, Illinois; four daughters, Mary (Jim) Reed of Seffner, Florida, Teresa (Harry) Stripe of Flower Mound, Judy (Michael) Warrick of Little Rock, Arkansas, and Jane (George) Ingersoll of Batavia, Illinois; 17 grandchildren; and five great-granddaughter. She is also survived by two brothers, Linden Drda of Edwardsville and Verlin Drda of Kirkwood, Missouri. Along with her husband, Jean was preceded in death by her parents.
Jean was a charter member of Immaculate Heart of Mary Catholic Church and a member of the Ladies of Mary. She enjoyed quilting and was a member of Piecemaker's Quilt Guild, the American Quilter's Society, the International Quilting Association, and the Land of Lincoln Quilting Association. Jean received her bachelor of science in education from Illinois State University in 1951. She taught school for several years prior to becoming a homemaker. Jean also worked at the Galesburg Sewing Center for 20 years.
Visitation was. Thursday, May 28, 2015, at Watson-Thomas Funeral Home and Crematory, Galesburg. Funeral Mass was at 10 a.m. Friday, May 29, 2015, at Immaculate Heart of Mary Catholic Church. Rev. Msgr. Ernest Pizzamiglio officiated. Burial was in St. Joseph's Cemetery, Galesburg. Memorials may be made to Costa Catholic Academy, Immaculate Heart of Mary Church, Catholic Charities, or Habitat for Humanity. Expressions of sympathy may be sent to the family at www.watsonthomas.com.
Published by The Register-Mail on May 28, 2015.
To plant trees in memory, please visit the Sympathy Store.
MEMORIAL EVENTS
May
28
Visitation
6:00p.m. - 8:00p.m.
Watson-Thomas Funeral Home
1849 N Seminary St, Galesburg, IL
May
28
Rosary
8:00p.m.
Watson-Thomas Funeral Home
1849 N Seminary St, Galesburg, IL
May
29
Funeral Mass
10:00a.m.
Immaculate Heart of Mary Catholic Church
IL
May
29
Burial
St. Joseph's Cemetery
Galesburg, IL
Funeral services provided by:
Watson-Thomas Funeral Home
MAKE A DONATION
MEMORIES & CONDOLENCES
Sponsored by Watson-Thomas Funeral Home.
3 Entries
I got to know your mother thru her quilting. My husband is a Galesburg native. I went to the AQS Show when her Northern Lights quilt was exhibited. That lead to her staying at my home and her teaching machine quilting for my guild in Burlington, WI. When she came to stay she brought me a small wallhanging that is still proudly hanging in my home. It is one of my most prized possessions. I will always remember her as a talented, kind and gracious lady.
Linda Eastburg
June 7, 2015
The Family of Jean,
My Sympathy goes out to you, Jean was a Excellent quilter and I envy her talent. Cherish those quilts, that will be your memories of her,
A former Quilt Quild Member- Liz Rossell
Elizabeth Rossell
June 1, 2015
Dear Theresa and family,
My thoughts and prayers are with you all at this time.
Barb Parkinson-Wood
May 28, 2015
Showing 1 - 3 of 3 results