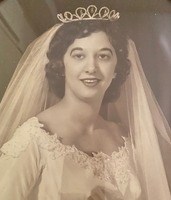 BORN
1938
DIED
2021
FUNERAL HOME
Kenny Funeral Home - Sharon
41 Main Street
Sharon, CT
Christine Francis Hervieux
Norfolk-Christine Francis Hervieux, 82, of Norfolk died peacefully at Geer Village on July 26, 2021. She was the loving wife of the late Wilfred "Willie" Joseph Hervieux, Jr.
Chris was born August 23,1938 in Torrington, CT, the daughter of the late Roger and Grace (Nataro) Neri. She was a graduate of the Torrington High School and went on to work at the underwood factory in Hartford, CT. It was there where she met the love of her life, "Sonny" and was wed May 7th ,1960. Chris gave birth to her sons Daniel Joseph Hervieux in 1961 and to Douglas Alan Hervieux in 1962.
Chris worked other jobs in her time also including Reynolds and Reynolds, Mechachini's grocery store in Winsted and as a traffic director.
She is survived by her two sons Danny and Douglas Sr. (Machelle); her grandson Dougie, Jr. She is also survived by her sibling David (Reggie) and many nieces and nephews. She was predeceased by her brother Roger Jr.
A memorial service will be celebrated at the Battell Chapel of the Church of Christ in Norfolk on August 14 at 11 a.m.
Memorial contributions may be made to the Danny Hervieux care and trust fund managed by the Kenny Funeral Home, P.O. Box 12, Sharon, CT 06069. The Kenny Funeral Home has care of arrangements.
Published by Register Citizen on Aug. 12, 2021.
To plant trees in memory, please visit the Sympathy Store.
MEMORIAL EVENTS
Aug
14
Memorial service
11:00a.m.
Battell Chapel of the Church of Christ
Norfolk, CT
Funeral services provided by:
Kenny Funeral Home - Sharon
MAKE A DONATION
MEMORIES & CONDOLENCES
Sponsored by RegisterCitizen.com.
2 Entries
Condolences to Danny, Douglas Sr and Douglas Jr
Pat Hervieux
August 17, 2021
I am sending warmest wishes to the family at this difficult time.
Ginger Palmer
August 13, 2021
Showing 1 - 2 of 2 results