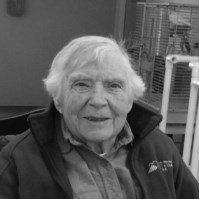 BORN
1920
DIED
2018
Hutchinson, Elizabeth
Elizabeth Woodruff Hutchinson, 98, died on July 17 in Deerfield, NH after a long and active life. Betty was born in Lynn, MA on February 18, 1920 to Watson and Edna Spurr Woodruff - the middle daughter in a family of three sisters. She grew up in Manchester, CT where her father was the minister of Center Congregational Church. Music, poetry, nature, sports and Girl Scouts were early and life long interests. Starting in 1928 Betty and her family spent summers at a cottage on Silver Lake in New Hampshire – a tradition which continued for 90 years.
Betty attended Syracuse University where she majored in sociology, then Yale School of Nursing earning her Masters degree early in 1945. She served as a Army nurse in the Philippines from April 1945 to January 1946.
On July 27, 1946 she married Jonathan Hutchinson – a marriage which lasted 66 years until Jon's death. Jon and Betty spent most of the next 60 years living in Torrington CT where they raised seven children. After 22 years with preschoolers at home, Betty became a school nurse. She worked in the Torrington School system for 19 years, retiring in 1988. Betty was active in Center Church including service as a deacon and choir member, was a Hospice volunteer, played cello in the Torrington Civic Symphony and supported Jon in many endeavors. They were proud supporters, season ticket holders, of the UCONN women's basketball team.
Betty loved her children. Her gentle, caring presence is the foundation of our lives. She lives on in each moment one of us is kind, thoughtful, patient, loving, and present for others. She was also a great baker – oatmeal molasses bread and blueberry buckle were two family favorites which are now made by her children and grandchildren and requested at many family meals and community events.
Always an athlete who enjoyed skiing, swimming, tennis and hiking, in her '80s Betty took up road racing. She competed in the Manchester, CT Thanksgiving Day 5 mile race for many years setting time records in her age group. She still holds the record in the female 90+ division with a time of 1:17:31 set in 2010. Her final races at age 94 were only 5Ks (3 miles).
In 2006 Jon and Betty moved to a retirement community in Concord, NH and spent long summers on Silver Lake. Betty's love of poetry continued as she recited poems by Frost and R. L. Stevenson and sang familiar songs until her death.
We are particularly grateful for the excellent care mom received from the staff at The Inn at Deerfield over the last 2 years and from Compassionate Care Hospice.
Betty was predeceased by her husband in 2012, by her sisters Peggy in 1980 and Jean in 2010. She is survived by her children Anne (Gene) of Great Barrington, MA, Jack (Rebecca) of Deerfield NH, Hope (Silver Lake, NH), David (Valerie) of Torrington, CT, Chuck (Georgetown, Guyana), Betsy (Doug) of Fairview, NC, Mark (Anjalee) of Lewisburg, PA, eighteen grandchildren and seven great-grandchildren.
A celebration of Betty's life was held with her last summer. A memorial service will be held at The Madison (NH) Church on August 4th at 3:00 p.m. As per her wishes her body has been donated to the medical school at Boston University. Donations in her memory can be made to the Unitarian church in Tamworth, NH – UUFES, P.O. Box 474, Tamworth, NH, 03886. Condolences can be sent to the family at P.O. Box 146, Silver Lake, NH 03875.
Published by Register Citizen on Jul. 24, 2018.
To plant trees in memory, please visit the Sympathy Store.
MEMORIAL EVENTS
Aug
4
Memorial service
3:00p.m.
The Madison (NH) Church
CT
MAKE A DONATION
MEMORIES & CONDOLENCES
Sponsored by RegisterCitizen.com.
5 Entries
Catherine Fries Rarick
August 10, 2018
Betty & Jon were great neighbors in Torrington for many years. My wife and I lived across the street for many years and when they were ready to sell their house across the street from us we purchased it and enjoyed it together until my wife passed away in 2010. I sold the house a few years later and retired.

In the winter we would help them clear their driveway after a snow storm and Betty would always make us some bread or something special. Her and Jon were such a great couple and they will both be missed.
Bruce Carlson
August 1, 2018
We were so pleased to have made Betty's acquaintance, and are richer for it. Deepest sympathies on your loss, Jack and family.
Amy & Paul Murphy
July 30, 2018
Dear Family, The Army Nurse Corps Association extends its deepest sympathy on the passing of Betty. We acknowledge her service in the Army Nurse Corps, and thank her for all she did for our service men and women. I'm sure she had many stories she shared with you.

Sincerely,
Robin Hightower, Colonel, ANC, Retired
Director, Region I, Army Nurse Corps Association
Robin Hightower
July 29, 2018
Dear Family,
Betty was an amazing caring brilliant gentle woman. I had the pleasure of working with her in the Torrington School system. What a legacy she leaves all of you. She will be remembered with great affection.
Sincerely,
Cheryl Dwyer
Cheryl Dwyer
July 25, 2018
Showing 1 - 5 of 5 results