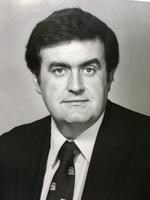 FUNERAL HOME
Phalen Funeral Home
285 Migeon Avenue
Torrington, CT
Conway, Michael
Michael J. Conway, 74, of Torrington, died on February 6, 2019 following a long illness. He was the son of M. Tracy and Catherine (McElhone) Conway. He leaves behind Melissa (Mettling), his wife of 51 years and the love of his life. He graduated from Torrington High School in 1962 and the University of Connecticut in 1966. He also received his Master's and Sixth Year degrees from the University of Hartford. Like his father, he was an English teacher and chair of the department at Torrington High School. After serving two terms as a city councilman, he was elected Mayor of Torrington for three terms. During that time, he was President of the Connecticut Conference of Municipalities. He then served as Assistant Director of Education at the Connecticut Junior Republic. After retiring, he and Melissa spent their time caring for and loving their grandchildren. He also continued to volunteer for many community organizations, notably Connecticut Volunteers in Service to the Blind and Handicapped, the Oliver Wolcott Library, and the UConn Alumni Association.
Mike was a lifelong New York Yankees, Torrington Raiders, and UConn Huskies fan, an avid fisherman, a fabulous cook, and the consummate storyteller. He was a voracious reader and an authority on Torrington history and trivia, and had a quick and clever wit, but his passion was teaching. He had many dear friends with whom he kept in close contact, and touched the lives of all who knew him.In addition to his wife, Mike is survived by children Kate and Mark Crowe, Maggie and Michael McGillicuddy, and Michael and Kristen (Bruni) Conway, and beloved grandchildren Ashley Crowe, Paige and John Trout, Mark and Tommy Crowe, MJ, Katie, and Maddie McGillicuddy, and Emma and Molly Conway. He cherished his brothers- and sisters-in-law, Tom and Kathy Mettling, JoAnn Ryan, Margaret Fitzgibbon, Bebe and Tom Duffy, and Doree and Joe Dubyel, and his many nieces and nephews. He was predeceased by his brothers Thomas and M. Tracy Conway, Jr., and his lifelong best friend, Michael A. Merati.A Mass will be celebrated on Wednesday, February 13 at 11 a.m. at St. John Paul the Great Parish (St. Francis of Assisi Church), 160 Main Street, Torrington. Burial will be at the convenience of the family. Friends may call on Tuesday from 4-7 p.m. at the Phalen Funeral Home, Migeon Avenue, Torrington. In lieu of flowers, donations may be made to the Torrington High School Music Department, Wayne Splettstoeszer, Torrington High School, 50 Major Besse Drive, Torrington, CT 06790. www.phalenfuneral.com
Published by Register Citizen on Feb. 9, 2019.
To plant trees in memory, please visit the Sympathy Store.
MEMORIAL EVENTS
Feb
12
Calling hours
4:00p.m. - 7:00p.m.
Phalen Funeral Home
285 Migeon Avenue, Torrington, CT
Feb
13
Funeral Mass
11:00a.m.
St. John Paul the Great Parish (St. Francis of Assisi Church)
160 Main Street, Torrington, CT
Funeral services provided by:
Phalen Funeral Home
MAKE A DONATION
MEMORIES & CONDOLENCES
Sponsored by RegisterCitizen.com.
21 Entries
Melissa and family,
My thoughts and prayers are with you during this difficult time.
Sincerely,
Anne Ruwet
Anne Ruwet
February 18, 2019
I m sorry for the loss that you all are feeling at this time. Each of you have memories of your loved one. May those memories help bring a small amount of comfort to each of you. We are thinking and praying for each of you .

Truly sorry for your loss. Mike was a great man who did so much for the school system and Torrington. God bless you in your time of sorrow, my prayers are with you.
Jim Richardson
February 11, 2019
We are so sorry for your loss.May God Bless you always and good memories sustain you at this difficult time.

Our thoughts are with all of you at this time. Your dad was a great guy. Cherish your memories.. he will be in your hearts forever.

Wolf, Patty, Melissa and Braden
February 11, 2019
Mrs. Conway and family, I am so sorry to hear of your loss.
Erica (Kostak) Dyndiuk
Erica
February 11, 2019
Kate, Mark and family... We are so sorry to hear of the passing of your dad. He was such a great guy. Cherish all of the memories with him. He will be in your hearts forever.
Our thoughts and prayers are with all of you.

Love,
Wolf, Pat, Melissa and Braden
February 11, 2019
Melissa and Family,
So sorry to hear of Mike's passing, he was a great person and a friend for many years. Please accept our deepest sympathy.
Rick and Esty Macsata
February 10, 2019
How sad to hear this news. The last time I saw Mike was when we both were receiving chemo treatments at the Smilow Cancer Care Center on Kennedy Drive. We both enjoyed reminiscing about our days at UConn in the 1960s and, particularly, the great times we shared in the UConn Husky Marching Band! Condolences to the family - Mike will surely be missed. - Will Minton
February 9, 2019
So sorry to hear of Mikes passing..Melissa you and your family will be in my prayers..Janet Samal Snyder
Janet Snyder
February 9, 2019
one thing that really impressed me about Mike was his relationship with his children , how much he loved them and they loved him.
scott jenkins
February 8, 2019
Showing 1 - 21 of 21 results