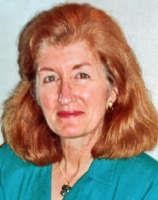 "She isn't eating or drinking enough to sustain life.", the hospice nurse, Flavio, said. But that strong heart refused to give up the fight.

Where had it all started? Born of strong New England stock in Boston, Roger Huston was her father and Ruth her mother. She graduated from Bates College, Maine, in 1962 and headed for the West Coast seeking new adventure, interesting people, exciting men and she found it all. Her opinions changed from conservative New England to West Coast liberal, and she wasn't afraid to let you know it. At the same time her private life became very public and she didn't try to hide it.

Brenda's zest for life was obvious and her willingness to go out on a date was known to many of the men at California Chemical Company where she worked for twenty years. More than one thought it was love but they were soon disappointed.

Many people were surprised, shocked when she moved in with a 42 year old man she met at work, then married him while she was still just 28, and they became inseparable, a unit. Whether playing bridge, bird watching, camping, hiking, they were always together; she and George were in love.

When they retired in 1982 their travels took them to Canada and Europe and they camped through the west and were active in the local Democratic Party.

It seemed that their idyllic life would go on forever, but it changed when Brenda started to forget things, which was at first mildly amusing. She'd wander off and became unable to perform the simplest task or just talked nonsense. She was diagnosed with vascular dementia in 2004 and entered memory care in 2014. The disease wore her down slowly until she lost the ability or the will to speak and became bedridden. It was sad to see this beautiful, vibrant woman slowly sinking. And yes, a person, has to drink and eat, however little, in order to stay alive, but finally, on October the sixth, at one thirty in the morning, Brenda gave up the fight and closed her eyes for the last time.

Brenda is survived by her husband, George, of 48 years, a brother and two stepsons

A final farewell for Brenda will be held Sunday, November 12th, from 2-5 pm at Churchill Estates, 1919 Bailey Hill Rd, Eugene.

Remembrances in lieu of flowers to Food for Lane County or Greenhill Humane Society in Eugene or your local food bank or animal shelter.

To plant trees in memory, please visit our Sympathy Store.
Published by Eugene Register-Guard on Oct. 29, 2017.
MEMORIAL EVENTS
No memorial events are currently scheduled.
To offer your sympathy during this difficult time, you can now have memorial trees planted in a National Forest in memory of your loved one.
MAKE A DONATION
MEMORIES & CONDOLENCES
1 Entry
My condolences to the family for your loss of such a dear person. John 5 : 26-28.
Tima R
November 2, 2017
Showing 1 - 1 of 1 results