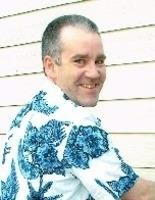 BORN
1971
DIED
2021
Deric Todd Couch
June 21, 1971 - April 24, 2021
Deric was born June 21, 1971 in Eugene, OR at Sacred Heart Hospital to Sharon Lynn Couch and Roger Curtis Couch. He passed in his sleep of natural causes on the evening of April 24, 2021.
Deric grew up primarily in Eugene, OR and graduated from North Eugene High School class of 1989. During his elementary, middle and high school years Deric was an avid baseball player and made many lasting relationships. After high school Deric attended Lane Community College where he obtained his Associates Degree and then went on to the University of Oregon where he received his BS in Exercise and Movement Science.
After College Deric pursued a career in Physical Therapy but after a couple of years he got into banking. He moved to Portland, OR and his financial career started with Washington Mutual but ended with JP Morgan Chase Bank where he ended his career as a Registered Banker, among many other roles he held with Chase.
Deric was a gentle and kind soul. He was a soft spoken person who cared very much for others. He was a son, brother, cousin, friend, uncle, co-worker, photographer, runner and hiker to name a few of his many titles.
In his spare time he loved to run, hike and backpack and take pictures. He has ran many marathons in his time and was a very avid runner. When he would backpack he would hike to crazy remote places at very high elevations where he could capture the wilderness and bring it to life in his pictures. He enjoyed spending time with friends at the coast. Deric will be very missed.
Please sign the guest book at www.registerguard.com/legacy
Published by Eugene Register-Guard from Jul. 8 to Jul. 11, 2021.
To plant trees in memory, please visit the Sympathy Store.
MEMORIAL EVENTS
To offer your sympathy during this difficult time, you can now have memorial trees planted in a National Forest in memory of your loved one.
MAKE A DONATION
MEMORIES & CONDOLENCES
0 Entries
Be the first to post a memory or condolences.