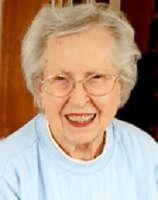 Gladys Hart, 96, of Eugene, Oregon, passed away on March 2, 2018, after a brief illness, surrounded by her loving family.

Gladys was born in Eugene, Oregon on October 3, 1921 to John and Lillian Hart. She graduated from Roseburg High School in 1939 and continued her studies for two years at Oregon State College in Corvallis.

While volunteering at the Army Air Corps "filter station" in Roseburg, Gladys met Sgt. Charles Hart who was a volunteer supervisor. They fell madly in love and were married January 17, 1943, shortly before Charlie shipped out to the Pacific Theatre. They were married 65 years and truly loved each other until Charlie's passing, incredibly, exactly ten years to the day prior to Gladys' passing.

Gladys worked as a bookkeeper for New Service Laundry and US Bank in Roseburg, Oregon for a number of years prior to giving birth to her first child. She became an incredible homemaker, mother, and community volunteer. Gladys enjoyed gardening and baking the world's best refrigerator cookies! She was actively involved in Eastern Star, the Girl Scouts, PEO, garden clubs and other activities. Those who knew Gladys appreciated her quiet strength, common sense, friendly nature, and her unconditional love and support of her family members.

Gladys requested that there be no funeral service, but instead "just go out and have a nice dinner -- you know what I like." In lieu of flowers, Gladys asked that donations be made to the OHSU Foundation (note Layton Aging & Alzheimer's Disease Center) or to the Susan G. Komen fight against breast cancer.

Published by Eugene Register-Guard on Mar. 11, 2018.
To plant trees in memory, please visit the Sympathy Store.
MEMORIAL EVENTS
To offer your sympathy during this difficult time, you can now have memorial trees planted in a National Forest in memory of your loved one.
MAKE A DONATION
MEMORIES & CONDOLENCES
5 Entries
RIP beautiful Gladys. You taught me so much about life l truly valued our friendship. I cannot believe you are gone but please know I poved you all along and just want to make you proud.
June 15, 2019
When I moved to Eugene in 2009, the first person I met in my neighborhood was Gladys. We shared a "backyard fence". I must say that knowing Gladys was an enriching and wonderful experience. She will be missed by many...especially me.
Jan McElroy
March 13, 2018
Gladys was such a sweet person who expressed her continuing love for her husband Charlie and spoke often of her wonderful children. She felt truly blessed. In actuality, she was a blessing to all of us. I will miss seeing her, even though only once a year. Kind Regards - Anita LaVassaur
March 12, 2018
RIP Mrs. Hart
Marlene Schotte
March 11, 2018
We love you and miss you so much! You were the best!
Jim Hart
March 11, 2018
Showing 1 - 5 of 5 results