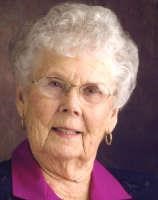 BORN
1918
DIED
2016
Harriet Ruby Smith was born in La Grande, Oregon on April 5, 1918; she was the only child of George and Jean Owsley Ruby. Harriet and her mother shared a strong dislike for their middle names and, whenever they could, each one chose to use her maiden name as her middle name. Her father's long career with Bell Telephone soon required that the little family move from LaGrande to Portland, Oregon. Upon completing her formal education, graduating from Jefferson High School in 1935, Harriet also began working for Bell Systems where she met Wayne W. Smith. They were married at home on July 25, 1941 and settled in The Dalles, Oregon before Wayne left for the War. After Wayne returned and resumed working for the Bell System, as his wife, Harriet could no longer work for the Bell System. "Ma Bell" eventually relocated Wayne to Eugene. Always an Oregonian, Harriet thought of herself as growing up in Portland and living her adult life in Eugene.

In 1965, Harriet and Wayne were delighted to join a newly established golf facility, Shadow Hills Country Club. For the next ten years, until Harriet became a widow in March 1975, the Smiths were very active members of Shadow Hills. In the early days, as they became thoroughly committed golfers, they also participated in the tree planting and fairway rock removal efforts supplied by Shadow Hills' founding members. As he was losing his battle with leukemia, Wayne wisely made Harriet promise not to leave Shadow Hills. Harriet survived her early widowhood and thrived in the warmth and wholesome activity of Shadow Hills Country Club. Serving on committees, scoring for tournaments, organizing an annual women's event, playing bridge, enjoying most evening social gatherings, encouraging new golfers, Harriet could be counted on to greet and welcome each new member.

In a 2012 Thank You Book from Shadow Hills' members, Harriet was recognized as "a major influence in establishing Shadow Hills' friendly, inclusive culture." Harriet's service and generosity to Shadow Hills Country Club endured for over 50 years. Although she could no longer play golf, Harriet maintained a golfing membership to the end.

From her early days Harriet did not fit the stereotype of an "only child who had no children". More than half of the 185 Jefferson High School 1935 graduates signed Harriet's yearbook. Everyone knew and loved Harriet at Shadow Hills. In the 1980s, Harriet was a favorite sales associate when she worked for Marley's a dress shop in downtown Eugene. And most recently, she has been known as a warm, friendly, positive, outgoing resident of Terpening Terrace. She will be especially missed by Hazel and Gertrude who joined her daily in Terpening's dining room. Harriet was able to complete her nearly nine-year residence at Terpening Terrace through the very skilled, devoted, care-giving team headed by Diane Johnson, assisted by Jerri, Shirley, and Kay together with the New Horizons' night crew, Kathy and Tessie.

Although no American woman could vote when Harriet was born, by the time she was 21 she began a serious career of political awareness and voter participation. Harriet subscribed to and read the paper every day until the last week of her life. Harriet was a self taught investor and quiet philanthropist. There are many charities in Eugene that have benefited from her generosity, including Sacred Heart Hospital, The University of Oregon, the Eugene Public Library, and GreenHill Animal Shelter. She was especially concerned about patients and students who were hearing impaired and designated some of her gifts to serve those who suffered from hearing loss.

In the summer of 1998 two of Harriet's golfing friends, Phyllis Brown, MD and Susan Gilmore, overheard Harriet wishing aloud she could go to New York and see the award winning Broadway hit, The Lion King, but lamenting that she knew it would not be wise to make the trip alone. After some discussion and planning, the three of them traveled to NYC and not only saw The Lion King, but also went to the top of the New York Trade Center and the Empire State Building; they saw multiple shows on and off Broadway, attended The Metropolitan Opera and the New York City Ballet. The NYC trip accelerated Harriet's golfing friendships with Phyllis and Susan into relationships that most resembled surrogate daughters with extended family connections. Many a Sunday dinner, prepared by Phyllis, included four generations at the table: Harriet, Phyllis and Susan, daughter Margaret and her husband Jay Lara, and their three children, Drew, Tyler and Emily Lara. We were with Harriet to the end and will miss her greatly.

We will gather at 2:00pm, Sunday, January 24, 2016 at Terpening Terrace for a Celebration of the life of Harriet Ruby Smith. In lieu of flowers, please donate to Sacred Heart Hospice, PO Box 10905, Eugene, Oregon 97440 or to a charity of your choosing.

Published by Eugene Register-Guard on Jan. 18, 2016.
To plant trees in memory, please visit our Sympathy Store.
MEMORIAL EVENTS
To offer your sympathy during this difficult time, you can now have memorial trees planted in a National Forest in memory of your loved one.
MAKE A DONATION
MEMORIES & CONDOLENCES
3 Entries
For more than 30 years Harriet's warm friendship extended across the Pacific to the tiny island of Guam. Every summer we spent two months in Oregon and Washington .... and we play golf at Shadow Hills with friends. Harriet welcomed us with her cheerful personality and we enjoyed talking and joking with her about her many interests and activities. It's heartwarming to sit at a lunch table and see almost everyone come by to give a hug or peck on the cheek to their friend Harriet. Everyone loved her and she will be missed ..... heaven has a new very delightful angel.
Susan & Lana
January 20, 2016
Harriet was a very important part of the Plath family. She and my mother Viola were very close friends. They worked together at Marley's and after Wayne passed she became part of the family. Along with my father Ace the four of us enjoyed many rounds of golf at Shadow Hills. Harriet spent many Thanksgiving dinners and Christmas Days at my parents home in Eugene. She joined us at Neskowin on the Oregon coast where we all played in the Buoy's and Gulls golf tournament. My wife Carolyn and I were married on the 7th tee at Neskowin and Harriet was one of the most important people in attendance. Her wedding anniversary date of July 25th was the same as my parents which enabled all of us to celebrate together. Harriet was a warm and caring person. The entire Plath family will miss her greatly.
Ron Plath
January 19, 2016
May your memories of the wonderful times you shared with your loved one comfort you and your family, today and always.
American Heart Association
January 18, 2016
Showing 1 - 3 of 3 results