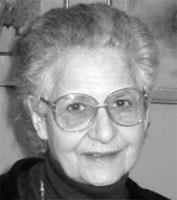 BORN
1928
DIED
2021
Marion Walter
July 30, 1928 - May 9, 2021
Marion Walter, world-renowned mathematics educator and a Eugene resident for the last 44 years, passed away on May 9, 2021 in Eugene, Oregon at her apartment in Cascade Manor. Marion was born on July 30, 1928 in Berlin, Germany. At age 10, she was one of 10,000 Jewish children evacuated from Germany and surrounding countries to the United Kingdom by Kindertransport, an organized rescue effort that took place beginning in 1938 before the outbreak of WWII. Marion described memories of the train ride and of the rough boat trip across the English Channel. She remembered being terrified upon arrival seeing all the British police officers in uniform because the only uniformed officers she had ever seen were Nazis.
While in England, Marion attended boarding school, where upon her graduation at age 16 she earned a mark of distinction on the Cambridge University School Certificate exam. The boarding school, having lost their mathematics teacher, asked Marion to become their mathematics teacher. She taught for two terms and found that she enjoyed teaching.
Marion attended college in England for two years before leaving for the United States in 1948. She attended Hunter College in New York City where she majored in mathematics. Marion then went on to earn her master's degree in mathematics from New York University in 1954. In all of her professional life, Marion never formally applied for any of the positions she held; rather, because she was known for teaching excellence, each one was offered to her without a formal application process.
In 1956, Marion took a one-year appointment at Simmons College in Boston. At that time, the college did not offer a major in mathematics, but at the end of the year she was asked to create one. Disliking the administrative aspects, she stepped down as department chair after four years and remained at Simmons teaching until 1965 when she left to concentrate on her doctorate at Harvard Graduate School of Education. She received her doctorate in 1967 at Harvard, was appointed assistant professor, and taught elementary and high school teachers in Harvard's Master of Arts Teaching program.
At Harvard, Marion embarked on a long-time collaboration with her colleague Stephen Brown. They created a course that focused on posing and solving problems. Their joint work resulted in numerous journal publications and the enormously influential book The Art of Problem Posing, first published in 1983 and currently in its 3rd Edition. She was the founding member of the still active Boston Area Math Specialists (BAMS), which runs regular workshops for elementary school specialists. In 2003, Marion was elected to the Massachusetts Hall of Fame for Mathematics Educators. Marion was a math consultant to several projects, including the venture that became Sesame Street. She authored a teacher's guide for a unit in informal geometry called "Boxes, Squares, and Other Things" and wrote several books for young children that make use of a mirror for exploration. The Mirror Puzzle Book, which is for older children and adults, is described as "a puzzle book with no words." Marion received Honorable Mention for her children's books in the Annual New York Academy of Science Book Awards in 1973 and 1986.
In 1993, a mathematics theorem was named the Marion Walter Theorem. It says: In a triangle, draw line segments from each vertex to the trisection points on the opposite side. The six drawn line segments will form the edges of a central hexagon. The ratio of the area of the hexagon to that of the whole triangle is 1/10.
After Harvard's Master of Arts in Teaching program was eliminated, Marion had several short-term appointments: at Dalhousie University in Halifax, Nova Scotia, in Israel as a UNESCO consultant, at SUNY Buffalo as an assistant professor, and at Children's Hospital in Boston as a research associate. In 1977 she came to Eugene, Oregon, where she had been hired by the University of Oregon Department of Mathematics. She taught prospective teachers of math, all of whom greatly respected and cared for her, and who admired her devotion to teaching. In 1993, Marion retired as Professor Emerita of Mathematics.
In 2011 Professor Walter donated her collection of photographs of mathematicians to the Archives of American Mathematics. The Marion Walter Photograph Collection consists of 70 photographic prints, negatives, and slides and includes such figures as Olga Taussky-Todd, John Todd, George Pólya, Paul Erdos, D.H. Lehmer, Ernst Straus, and many other distinguished mathematicians.
Marion remained connected to an organized group of Kindertransport Holocaust survivors, attending their meetings around the world. She gathered letters from some of the friends she met through the organization, two of which are on display, one in an Amsterdam museum, and one in Portland at the Oregon Jewish Museum.
In addition to being well respected in the worldwide mathematics community, Marion, an engaged and engaging person, was an artist and endlessly curious about how the world works. She noticed patterns and beauty in nature as well as in human-created art and other objects, and never failed to point these out to her companions. She had a gift for engaging children in fun mathematics endeavors, and is remembered fondly for this by many, young and not-so-young.
Her family is grateful for the loving care she received at Cascade Manor. We particularly want to thank Letty Morgan and Megan Horvath.
Marion is survived by her two nieces, Annette and Rachel Kann of New Zealand, as well as by many loving friends and caring colleagues. She will be deeply missed.
A memorial service was held at Temple Beth Israel on May 13th. To watch a recording of the service on YouTube visit:
https://youtu.be/-c4-sqg-FTw
If you would like to make a donation in Marion's memory, the following are organizations Marion supported:
- friends of trees : https://friendsoftrees.org/eugene/
- kinder transport association:
https://www.kindertransport.org/
- food for lane county : https://foodforlanecounty.org/
- atlas dogs : https://www.atlasdog.org/
- girls Angle : http://www.girlsangle.org/
- cielo de amor: https://cielodeamor.org/
Please sign the guest book at www.registerguard.com/legacy

To plant trees in memory, please visit our Sympathy Store.
Published by Eugene Register-Guard from May 13 to May 16, 2021.
MEMORIAL EVENTS
No memorial events are currently scheduled.
To offer your sympathy during this difficult time, you can now have memorial trees planted in a National Forest in memory of your loved one.
MEMORIES & CONDOLENCES
3 Entries
Marion was my neighbor on Orchard Street. She told me about kindertransport and WW2. She confirmed what I learned from my dad who was a merchant sailor in the late 1930's and combat merchant marine in WW2. The many things said at the funeral we saw on Orchard - she talked to children about math when they visited Marion on their walks with their parents. She was the sidewalk patrol for the neighborhood and new the bus routes well. We lost a remarkable human being.
Frances Munkenbeck
Neighbor
May 25, 2021
I had the privilege of knowing Marion when we both were residents at Cascade Manor and producing a documentary-style film about her Kindertransport experience.
Dick Jordan
Neighbor
May 16, 2021
I met Marion at the UO and our friendship continued over the decades. Always fascinated with patterns, she taught my son how to build a tesselated icosahedron out of sticks. She created patterns of kindness, friendship, curiosity, connection, and appreciation. We were particularly delighted to find out that she and my uncle had worked together at a math institute when they were young scholars and that we both had connections with Simmons College. She impacted thousands of teachers, who in turn continue to pass on Marion's gifts. That pattern will go on forever.
Nancy Meltzoff
Friend
May 16, 2021