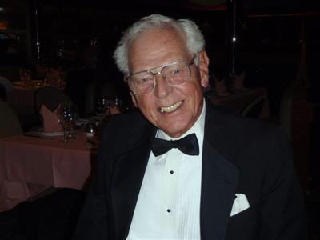 He is reunited with his parents Reverend Phil and Arvalee Chappell; a son, Gil; granddaughter Nadalee; brothers, Phil and Bob Chappell; and a niece Cathy.

Edwin served in the United States Marine Corps during the Korean Conflict. He then attended McMurry College where he earned a BA Degree in Education and Philosophy, and a Master's Degree in Administrative Education. He taught in the Abilene Independent School District before attending SMU, where he earned a Master's Degree of Theology, in 1960. He received an Honorary Doctorate of Divinity from McMurry University, in 1976. He served congregations of the United Methodist Church and communities throughout Texas and New Mexico, before retiring from First United Methodist Church, Albuquerque, New Mexico, in 1993.

Family, friends, and strangers whose lives were touched by Edwin would say that the world is a better place because of Edwin Chappell. Published by Abilene Reporter-News from Oct. 26 to Oct. 27, 2014.
To plant trees in memory, please visit the Sympathy Store.
MEMORIAL EVENTS
To offer your sympathy during this difficult time, you can now have memorial trees planted in a National Forest in memory of your loved one.
Funeral services provided by:
Community Memorial Funeral Home
MAKE A DONATION
MEMORIES & CONDOLENCES
21 Entries
So sorry to hear of Edwin's passing. He was such a great man, and touched many lives. He was a special person to all the Kahl family.
Christy Kahl
November 5, 2014
My thoughts and prayers are with you in your time of grief. May your memories bring you comfort.
Annie Horne
November 2, 2014
My Condolences to Lee Chappell and family! He was an awesome man of God, Bless you all.
Marsha Blancet Larson
November 1, 2014
Dear Laura and family,

Edwin was one of the most influential people in my life. He was a fabulous inspiration and always made you feel good. I feel so honored that he married Jeff and I and baptized our children. He was so special. I know I am lucky to have know him. Love to all.
Janet Sterba
October 31, 2014
Craig and I are sorry to hear of your loss. May God bless you all.
Craig and Nida (Ford) Chambers
October 31, 2014
In 1972 I was a young and agnostic High School Football Coach. The local Methodist Minister came to me and asked if I would take two of our local football players to a Football Camp. He told me all of our expenses would be paid for and I would be provided a car by the local car dealer. After some encouragement I agreed to go. We arrived in Estes Park Colorado and we were attending the National Conference of the Fellowship of Christian Athletes. In the middle of the week I became a born again Christian and as they say the rest is history. Edwin was my mentor and friend. With his help we started a FCA group at Lovington High School and would average around 100 kids who would attend. I then started to teach the High School class at the Methodist Church and all because he convinced me to go to a football camp. I am crying as I type this because he meant so much to my and my family. He was the best Pulpit Preacher I have ever heard preach and the people he touched are better because of it. Prayers to Laura and all the family
October 31, 2014
My sympathies to the Gleason family. I have fond memories of Larry as a fellow classmate. He was always very nice to me and I as many will miss him.
Betty Trevino
October 31, 2014
We are so sorry about Edwin. He was such a wonderful man. We remember him so fondly and Larry feels that he was such a positive influence in his life. Our prayers are with all the family. May God bless you all with strength, comfort and healing.
Larry and Melanie Ridenour
October 30, 2014
Dear Laura,
We wanted to send you our love and condolences. You and Edwin were so kind, sympathetic, and supportive of us when we lost our twin infant sons in 1990.We've never forgotten and are forever grateful. We have 2 lovely grown daughters now and so have been blessed. We pray for your comfort and the blessings of grace. Warmest regards, Jaffa and Dale Baltz, FUMC members
Jaffa and Dale Baltz
October 30, 2014
There are no words I can say that does this incredible man justice. All my love to Edwin and his family.
Laura Flick
October 29, 2014
There are no words I can say that does this incredible man justice. All my love to Edwin and his family.
Laura Flick
October 28, 2014
Dear Laura and Family,

I am so sorry for your loss. You are all in my prayers.

~Paul Giles III
October 28, 2014
Dear Laura, Our prayers are with you and your family. We always enjoyed our relationship with Edwin.
Bob & June Gill
Bob & June Gill
October 28, 2014
Dear Laura and family, We were so sorry to hear of Edwin's passing. So glad we got to visit with you two last year on our way to Gerald's. Dorsey met his Lord on October 18th (know this was your Birthday Laura ) and was buried on October 25th. They are probably walking those beautiful golf courses in heaven together. Our special love to each of you.Keeping all in our prayers.
Suzie Bonnell
October 27, 2014
We just wanted the entire family to know that our thoughts and prayers will we with all of you during this time. Love , Glyn and Betty
Glyn and Betty Hammons
October 27, 2014
Oh, my goodness! There are no adequate words. I guess I thought he would just go on forever. My love and sympathy to all the beautiful family. Of one thing I am certain, Herb was right there to greet him and continue their walk together. Warm memories will see us through until we can all be together again.
Doris Hoffman
October 27, 2014
Dear Laura and family, my love, tears and prayers are with you at this sad time. I still miss you and all of the good times we shared at Grace. Serving with you and Edwin was the greatest time of my life. Often, I think of the many things that I learned from you and your family.
"Give without remembering and receive without forgetting." That is how I shall always remember Edwin. He was always giving and loving. God bless you and comfort you. "May the wind be always at your back and may God hold you in His hand until we all meet again." Mary Lou
Mary Lou Pattison
October 27, 2014
The world was indeed, a better place because of Edwin. His life was an inspiration to me and many others. May the peace of God be with during this time of mourning. I love you all, Dub Burke
October 27, 2014
Dear Laura and family, We were so sorry to hear of Edwin's passing! You all have such special places in our hearts. I remember so clearly the days that Edwin performed our wedding ceremony with such love and caring and the day that he baptized Matthew who cried the entire service. We love you all! I just know that Edwin and Daddy are walking those streets of gold and having a wonderful conversation. May you feel the peace that passing all understanding and our love.
Tena and Scott Spitsberg
October 27, 2014
Dear Laura and Family. I was so sorry to hear that Edwin passed. He was such a special person and I always cherished the kindness and wisdom he always had for me over the years. I was a better person for having him in my life and the world was a better place because of him. Both Edwin and Laura have a special place in my heart and my thoughts and prayers are with you. Love always!
Mike Nobles
October 27, 2014
Dear Laura & family,
We were so sorry to hear of Edwin's passing. You both have always held a special place in our hearts. I know he will be missed. I always remember Representative, You all brought the choir from your church in Albuquerque to Santa Fe to sing at the Governor's prayer breakfast. Edwin was so proud of his new pickup because he didn't have to wear a seat belt because he was always after me about that law we passed. Blessings to all of your family. Take care. Love you, Toots & John Green, Alamogordo, NM
Toots & John Green
October 27, 2014
Showing 1 - 21 of 21 results