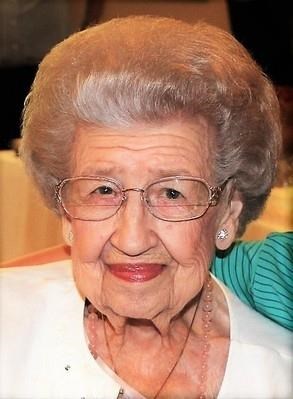 Abilene - Mary Ellen Webb -- known for her cooking, her love of Albany, Texas, her service in the U.S. Marines in World War II, and her reign as the family matriarch - died Saturday, Aug. 10, 2019. She was 98 and rather proud of it.

For years, Ellen's age was a closely-guarded personal secret. And then, when she turned 90, all of a sudden she wanted everyone in the family and in the community to celebrate it. The most recent celebration was last month when her 98th birthday became a nearly month-long event, with at least five cakes, supplemented by some of her other favorite dishes - popcorn shrimp, black-eyed peas, homemade ice cream, and pizza.

Ellen's own cookbook - You'll Be Going Back for Seconds - was a best-seller in Albany and Abilene and is out of print. Several recipes from the book will be included in the program at her funeral service.

Her funeral will be at 10:30 a.m. Saturday, August 17 at Matthews Memorial Presbyterian Church in Albany, with viewing and visitation from 9-10:15 at the church. Burial will be in Albany Cemetery under the direction of The Hamil Family Funeral Home in Abilene.

Ellen was born Mary Ellen Focke in Mexia, Texas, on July 9, 1921, to John and Alma Focke. She grew up on the family farm where she developed her fondness for fresh vegetables and her penchant for delicious home-style cooking.

She joined the Marine Corps in 1944, recruited first as a bugler because she had played oboe in the Mexia High School Band. However, she soon learned - after a few busted lips -- that the oboe and the bugle were not compatible. She became a stenographer instead and spent the war years at Quantico, Va., headquarters where she met and later married a fellow Marine, John Carden, an aspiring Major League pitcher. He died in a tragic farm accident in 1949 while Ellen was pregnant with their son John.

Ellen married Sam Webb of Albany in 1951 and they enjoyed nearly 57 years together before Sam died in 2008 at age 95. They operated Webb and Webb Insurance Co. and were deeply involved with Fandangle, Matthews Memorial Presbyterian Church, and numerous other civic activities in Albany.

After moving to Abilene, she joined First Central Presbyterian Church and enjoyed volunteering at the Friends of the Abilene Public Library Book Sale every June.

Ellen created quilts for her grandchildren and great-grandchildren and enjoyed shelling black-eyed peas, cream peas, and pecans and making plum jelly, peanut brittle, fruit cake cookies, and pickles for family members and friends. Her turkey and dressing, corn casserole, peach cobbler, and pecan pie were the highlight of family holiday dinners -- and her fried chicken was legendary.

Ellen's weekly hair appointments approached the level of religious fervor, as did the viewing of favorite TV shows, especially "Dancing with the Stars," "Wheel of Fortune," "Jeopardy," "Downton Abbey," and the Little League World Series. She spent a minor fortune on magazine subscriptions in her eternally hopeful but ultimately futile quest to win the Publishers Clearinghouse Sweepstakes.

In her later years, she gained distinction as the oldest local Marine attending the annual Marine Birthday Party in Abilene in November, and she served as Grand Marshal of the Abilene Veterans Day Parade in 2016. A highlight of her service as a World War II veteran was the opportunity to participate in the Honor Flight to Washington D.C. in 2011. On June 29 of this year she was the Guest of Honor at the Marine Corps League's State Convention held in Abilene. She was proud to be a Marine, displaying a Semper Fi sign in her home and bumper sticker on her car.

In observance of Ellen's 98th birthday this year, her family created the Sam and Ellen Webb Albany Heritage Scholarship, which will be given every year to a graduate of Albany High School who has been active in Fandangle and other school and community activities. The scholarship is endowed through the Community Foundation of Abilene, P.O. Box 1001, Abilene 79604. Ellen called it "the best birthday present ever." Memorial donations may be made in Ellen's name to the scholarship fund, the Fort Griffin Fandangle Association, or a favorite charity.

Memories may be shared and condolences submitted online at www.HamilFamilyFuneralHome.com


Published by Abilene Reporter News on Aug. 14, 2019.
To plant trees in memory, please visit the Sympathy Store.
MEMORIAL EVENTS
Aug
17
Viewing
9:00a.m. - 10:15a.m.
Matthews Memorial Presbyterian Church
TX
Aug
17
Funeral
10:30a.m.
Matthews Memorial Presbyterian Church
Albany, TX
Funeral services provided by:
Hamil Family Funeral Home
MAKE A DONATION
Please consider a donation as requested by the family.
MEMORIES & CONDOLENCES
Sponsored by Hamil Family Funeral Home.
2 Entries
She was literally "one in a million" and though I didn't know her well, I was always awed by her spirit--she loved life and was an inspiration to so many.
Ellen Richards
Acquaintance
August 18, 2019
What a wonderful lady! My "second Mom". Ellen meant so much to so many people throughout her life. Would that all of us could live our lives so well. We'll miss you. Tell Sam hello for us.