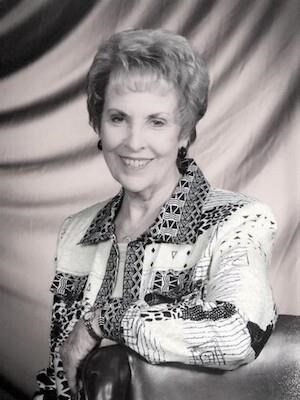 Abilene - Sandra Broesche went to be with her Lord and Savior on April 24, 2021 after a long illness.

Sandra was born in Abilene on October 6, 1940 to Herman and Wretha Whittle. She graduated from Abilene High School in 1958, after which she attended McMurry College.

She married Edwin Broesche at University Baptist Church in July of 1962 and they left immediately after the wedding for Quantico, Va. where he was stationed in the USMC.

After 3 years of active duty, they moved back to Abilene. Sandra went to work for the City of Abilene, as secretary to Warren Dodson, chief of police. Their first daughter, Rebecca, was born in December of 1966 with their second daughter, Rachel, following in May of 1969.

Sandra was active in the Abilene Junior League and the Abilene Woman's Club, being elected president of AWC in 2010-2011.

Her heart was to serve others, so she was active in Pioneer Drive Baptist Church in various ministries. She and her husband were also active in Texas Baptist Church Builders, travelling to Kentucky, Louisiana, Colorado, and Montana along with other places to build churches for small congregations. Sandra also volunteered for Meals on Wheels delivering meals to families for several years. In addition, she enjoyed visiting people from their church who were hospitalized.

Sandra was preceded in death by her parents and her older sister, Wretha Frances. She is survived by her husband; daughter Rebecca Darnell and husband, Scott; daughter Rachel Henderson and husband Hugh; two grandsons, Drew Henderson and Connor Henderson, and several nieces and nephews.

The funeral will be held at Pioneer Drive Baptist Church at 10:00 am on Wednesday, May 19, 2021, with a visitation to follow immediately after the service. Burial will be in the Texas State Veterans Cemetery at Abilene under the direction of The Hamil Family Funeral Home, 6449 Buffalo Gap Rd.

Memories may be shared and condolences submitted online at www.HamilFamilyFuneralHome.com

To plant trees in memory, please visit our Sympathy Store.
Published by Abilene Reporter News from May 11 to May 16, 2021.
MEMORIAL EVENTS
May
19
Funeral service
10:00a.m.
Pioneer Drive Baptist Church
701 S. Pioneer Drive, Abilene, Texas
May
19
Funeral service
10:30a.m. - 11:30a.m.
Pioneer Drive Baptist Church
701 South Pioneer Drive, Abilene, Texas
Funeral services provided by:
Hamil Family Funeral Home
MEMORIES & CONDOLENCES
Sponsored by Hamil Family Funeral Home.
2 Entries
Love you Edwin and you and the family are in our prayers. We loved Sandra and will always believe she was he most beautiful and precious woman we ever knew! We miss her!
EA and Donna CLICK
Friend
May 13, 2021
Edwin, you and Sandra touched David´s and my lives at PDBC, especially through the Nehemiah Ministry. May God comfort you and your family during this grieving period. Jesus loves you. Yes, He does.
Carolyn Kuykendall
April 29, 2021