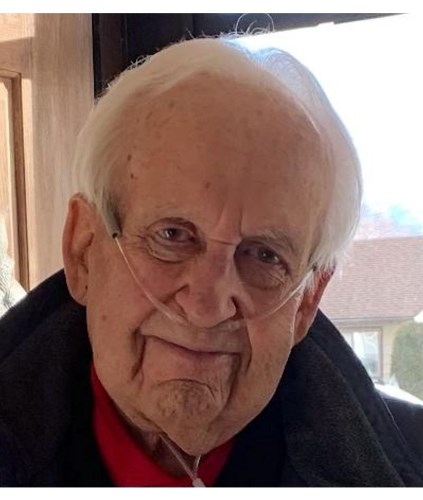 Dad attended school in Wilford and St. Anthony, graduating from South Fremont High School in 1953. He had a large group of friends in school and enjoyed being on the baseball team, scouts, and especially loved going to dances. After high school he enlisted in the U.S. Army, and was serving in Germany when he was discharged upon his own father's passing and he was needed at home.

Dad learned the value of hard work at a young age, a trait he was proud to have passed on to his children. He put all of his efforts into the work he chose, most notably at farming, a long career at Blocks department store from clerk to a vice president, and then retiring in a second career as an insurance adjustor for Farm Bureau Insurance. He was very much a people person and enjoyed his interactions with co-workers, customers and clients.

He married Shirley Kay Jones and they welcomed three children together, Chad J., Bonnie Lori, and Kari Lyn. The family lived in Wilford until 1974, when Dad's work at Blocks necessitated a move to Pocatello. He moved back to St. Anthony while working at Farm Bureau.

In retirement, Dad kept busy. He helped farmer friends plant and harvest wheat and potatoes, enjoyed road trips to pick up and trade cars for the auto dealership in town (often along with his brother Bob), made sure his lawn was always beautifully green and carefully mowed, read voraciously, and loved "going to coffee" daily with his buddies. He also loved taking drives and never took for granted the beauty of his Idaho home.

He was proceeded in death by his parents, sisters Bonnie and Linda, brother Ronnie, great-grandchild Henry, and sisters-in-law Michelle and Linda.

He is also survived by his brother Bob of St. Anthony, Idaho, sister Sherri of Riggins, Idaho, and nieces and nephews, whom he greatly loved.

We love and will miss Dad very much. He faced the challenges in his life with courage and determination. He was fond of saying, "Life is a series of continuing adjustments," and he did just that - forging ahead as best he could with whatever circumstances the day brought. As his voicemail said, "I hope you're enjoying the day, because I sure am."

As per his wishes, Dad was cremated. A graveside service to honor him will be held at the Wilford Cemetery on August 21, at 11 a.m.

Condolences may be sent to the family online at www.flammfh.com. Arrangements are under the direction of Bert Flamm Mortuary.
Published by Rexburg Standard Journal from Jun. 29 to Jun. 30, 2021.
To plant trees in memory, please visit the Sympathy Store.
MEMORIAL EVENTS
Aug
21
Graveside service
11:00a.m.
Wilford Cemetery
ID
Funeral services provided by:
Bert Flamm Mortuary - St. Anthony
MAKE A DONATION
MEMORIES & CONDOLENCES
Sponsored by Bert Flamm Mortuary - St. Anthony.
1 Entry
Chad: I'm sorry to know one of the first person's I thought of as a hipster has gone on. He was smooth as silk. Our prayers are with you.
Russell Weeks
July 1, 2021
Showing 1 - 1 of 1 results