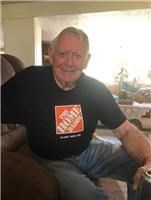 He joined his parents, Hilton & Maryellen Dabney, Roger Dabney, and his mother and father-in-law Dan and Laura McIntire on the other side. Ward was born in San Angelo, Texas, on July 22, 1940. The family moved to San Bruno, Calif., where he & his three brothers, Roger, Richard, and Walt grew up.

Ward joined the Navy at 17 years old and transferred to the Air Force in 1957 which brought him to Castle Air Force Base in California. That is where he met his bride of 60 years, Olivia Dabney of Planada, Calif. They raised their family in San Bruno, Calif., Livermore, Calif. and Atwater, Calif.

Ward worked for United Air Lines for 23 years commuting from Livermore, Calif., and Foster Farms as an electrician/management.

He was a member of the Veterans of Foreign Wars, American Legion, Lions Club and Elks in California. Ward joined the Church of Jesus Christ of Latter-day Saints when he was 15 years old.

Along with Olivia, they served five different missions together. He served as high councilor, Bishopric, Elders Quorum President, YM president, Scout Leader and nursery (his favorite). Ward was never hesitant to bear his testimony of our Savior Jesus Christ and his love for his family.

He loved serving at the Family History Center in St. Anthony. He was an outstanding baseball, basketball, volleyball, waterskiing, artist, man of all trades. He is known to his children as "Mr. Home Depot."

Ward will be laid to rest in Plainsburg, Calif. at a later date due to health problems with Olivia and COVID-19 restrictions. In lieu of flower there is a Venmo account set up.
Published by Rexburg Standard Journal from May 18 to Jun. 18, 2021.
To plant trees in memory, please visit the Sympathy Store.
MEMORIAL EVENTS
To offer your sympathy during this difficult time, you can now have memorial trees planted in a National Forest in memory of your loved one.
MAKE A DONATION
MEMORIES & CONDOLENCES
0 Entries
Be the first to post a memory or condolences.