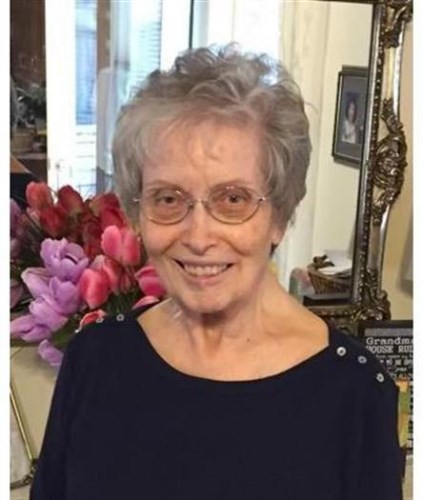 BORN
1934
DIED
2021
FUNERAL HOME
Flamm Funeral Home - Rexburg
61 North 1st East
Rexburg, ID
Jean Terry Barnes slipped peacefully through the veil early on the morning of June 9, 2021, at her home, surrounded by her loving children in Rexburg, Idaho. She finally "got her ticket punched" and we know she is joyful about that.

Jean was born on October 21, 1934 in Rigby, Idaho, the seventh and final child of John Harold and Lizzie Viola West Terry. She felt like an only child because her three sisters and three brothers were so much older. She loved them dearly, but loved being a "pocket aunt" to her nieces and nephews who were almost as old as she was.

Her father farmed several different properties throughout Idaho and Jean spent her growing up years in the Lost River Valley. She said that their family never had a lot of material possessions but they always had plenty.

Jean graduated in 1952 from the Butte High School in Arco as the valedictorian of her class. She lived in Moore and met her sweetheart, Jack Barnes, from Arco, while she was still in high school. They often double-dated with Jean's brother, Cecil and Jack's sister, Donna. They made plans to be married when Jack returned from his service with the United States Army during the Korean War. Donna and Cecil had chosen January 13, 1953 and Jean and Jack were delighted to join them, making it a double family wedding in the Idaho Falls Temple of The Church of Jesus Christ of Latter-day Saints.

Jean loved to play her piano. In her early years, she worked as a telephone operator in Arco, then later as a secretary for Westinghouse at the Atomic Energy Site. (She could type over 100 words a minute on an old manual typewriter). She worked until her first baby, Laurie Jean, was born. The next four children, Connie, Dale, Kevin, and Dann were born in quick succession followed later by the last child, Kristopher.

After frequent moves, in 1964 Jean and Jack and their little ones moved to Rexburg, Idaho which truly became home. The Teton Dam Flood in 1976 was a huge trial for them but they survived and thrived, serving many others with love. John (Jack) served as bishop of the Rexburg 5th Ward in his seventies with Mom beside him. They served a 12 month full time mission in the Tennessee Knoxville Mission 1993-1994. Other church service included Cub Scout den leader, ward Relief Society president, Primary president, and Rexburg Center Stake Primary President. She continued having parties with her Primary board for many, many years.

Jean loved people and enjoyed her associations with other members of the Daughters of the Utah Pioneers and the Tell-a-Tale Book Club.

In March of 2019 she realized a dream of a lifetime when she took her children and their spouses to the Rome Italy Temple of The Church of Jesus Christ of Latter-day Saints.

Jean spent the last four years living in one of the cottages at Homestead in Rexburg and loved welcoming in and socializing with all the residents. The many activities kept her spry and entertained, especially riding her three-wheeler bike in several parades with her "biker" friends.

The family wishes to extend special thanks to Homestead and Homestead Hospice.

Internment will be in the Rexburg City Cemetery following the service.