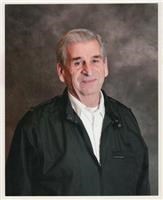 Ken was born August 10, 1936, in Burley Idaho, to Floyd and Effie Young. He was the ninth of 10 children. He spent his childhood in Burley, Idaho, graduating from Burley high in 1954.

After graduating, he served in the United States Air Force, and he was stationed in France. He got to see the world, while serving. While in Switzerland, he met the love of his life, Johanna Elbrink, a Dutch girl. They could barely speak each other's language when they met, they dated for a year, and Ken wooed her with his story about life in the US. They were married in Gouda, Holland, on December 27th, 1957. He was honorably discharged from the military and returned with Johanna to Burley, to start their new life.

Ken attended trade school in Pocatello and started work at INL as an off-hull tech. He worked at the site for 30 years.

Johanna passed away in 1974. Leaving their only daughter Kendra, with Ken.

He then married Carole Hatch and moved to Rexburg, Idaho, and lived with Carole and her 5 children.

He loved fishing and even more, he loved the cabin that he built in Island Park, Idaho. It was his perfect mountain getaway.

Ken will be remembered for his hard work ethic, loyalty and his love for his grandkids. Ken is survived by his only daughter, Kendrs (Jon) Bodine; and five step children: Kim (Denise) Hatch, Craig (Kimberly) Hatch, Darren (Marilyn) Hatch, Lezlee (Benjamin) Gallegos, and Stephanie (Bill) Whaley, as well as many grandchildren. He is also survived by his brother, Gaylord Young.

He was preceded in death by his wife, Johanna; second wife Carol; 7 sisters and 1 brother; and his great-grandchild, Mason Rowley.

Ken's funeral service will be held in Burley, Idaho, on Saturday, May 15th at 1 p.m., with a viewing held an hour before services. It will be held at Rasmussen Funeral Home.

Interment will be at the Pleasant View cemetery next to his wife Johanna, with military honors.